Our first trip to Tuscon- T(akeoff) minus 6 months

This is momentous occasion: Our youngest child is off to college. We are en route right now. It is momentous of course for the student – off to an out of state University 11 hours away by car.

It is momentous for us as a family: Big sister and mom had tearful good-byes. And it marks a momentous occasion in our count-down to full time RVing.

When we first laid out our “okay, we’re really gonna do this” plan – when we determined all that would have to transpire in order to get on the road full time – getting our then high school sophomore off to college was a main component of our time line.

We knew we would have to live in the same house until she left for school, and then we realized we couldn’t put the home up for sale the minute she left, so we planned on having her home for the winter holidays, then listing and leaving.

Some may think that sounds harsh. Where will she go when school’s out? What if she didn’t WANT to go off to college? There were a few months when we considered that our plans may get de-railed if she needed us. But things turned out just fine, and she’s become quite independent. Truth be told, we rarely saw her when she lived with us!  (She also  has other families she stays with.) So we won’t really be dealing with empty nest syndrome as much as some others will. 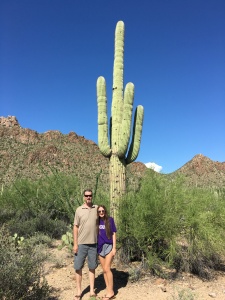 So here we are on interstate 10 at 9 pm. Nine hours into an eleven hour trip that has turned into four hours to go because of the miles of stop and go on freeways between Pasadena and Palm Springs. We just weren’t able to leave early enough to avoid rush hour on the LA freeway system.

And I’m thinking about the people with their 2X2X2 rules: no more than 2 hours on the road, stopping by 2 pm, and spending a minimum of 2 nights in one location – and I laugh. Ha! That will be the day. It seems even as we’re trying to transition into permanent vacation status, I don’t think we’ll ever be able to follow rules like that. I think people from the east coast must have come up with rules like that. Where it’s possible to be in another state in a two hour drive. But we’re from Central California, and it takes us over 2 hours just to get out of the valley. and HOURS more to arrive at another state.

Tom doesn’t mind driving at night, and it’s okay here in the blank desert area where there’s not much to see, plus we’ve been through here before. But from past experience (and mis-adventures) we know the wisdom of arriving for overnight set up well before dark. But this time we’re going to pull over on some BLM land for some shut eye so we can drive into Tuscon in the daylight. Although we’re behind schedule, so we may just stop at a rest stop.

Even though this will be one of our longer trips – Tuesday through Sunday – we’re still on our customary timeline: too many miles and not enough time for leisurely travel. Dorm move in is scheduled for 8am – so drive on we will.

As I contemplate the end of an era.

With this last and biggest hurdle being cleared, the departure date seems so much sooner. We are on T minus 6 months now, and the rush is on. SO much still to do.

We still have to finish out the botched flooring job with quarter round baseboards that need to be cut and stained. Finish painting the cockpit area and replace the two front cornice boxes. Get the desk mounted to the wall. . . what else?

That about clears up the redecorating projects. But there are still a lot of “Tom” projects on the RV such as installing solar panels and replacing batteries and the list goes on there as well.

But our biggest obstacle at this point has not changed from what it was when we began our 37 month countdown: getting rid of STUFF!! The office and the garage are still overwhelming. But we’re chipping away at that and all the other items on our to-do lists and we’ll get there. Although I have a sneaking suspicion that we’ll accomplish most of it in the last month(s) of crunch time before escrow closes closes on the house!

But I digress. This blog is about the children.

So now we’ll have 4 kids in 4 locations to visit and hopefully at least once a year we’ll all get together. (in my wildest dreams anyhow!)

So saying good-bye to the children that are grown and gone and not needing us around anymore isn’t proving to be that difficult, and we’re more excited for our youngest to start a new college adventure than sad for her to leave us.

But with every end comes a beginning.

While Tom’s youngest is off to college, my youngest is expecting a baby this fall. At T-minus 3 months to be exact.

I’m sure that more than one time an idea of full-timing across the country has been waylaid because of grandchildren. Who would want to be on opposite ends of the country for a first birthday – or 10th for that matter? And that’s one of the things we thought through before putting our plan into action. We figured we rarely got to see our 8 year old granddaughter who lives in the same town anyway, so maybe it would be a bigger deal when Grandpa and Grandma come back to town for a visit and we’d see more of her. We even have fantasies of kidnapping her for a week in the summers and taking her on a road adventure with us.

We knew there would most likely be other grandchildren down the road (terrible pun!) but didn’t want to put our plans on indefinite hold waiting for an announcement from the stork. So we put our plan into action, and settled on a date that worked around our empty nest status. The plan was head out as soon as the house was sold (ideally in February 2017) go straight to the Florida Keys, and wind our way slowly back across the county arriving back for the holidays with the families.

Then – and not too surprisingly – we get the announcement: My daughter will be having a baby in November.

While not derailing our timeline for selling the house, this newest development will definitely affect our “first year” road trip. While skyping with our 10 year old granddaughter and kidnapping her for a week in a national park next year sound like viable plans, missing the first year of this next baby in our family is a no-go. Literally.

Our optimal timeline of leaving in February and coming back for a visit by November or December meant missing prime baby months (6 to 9 months IMHO). So we’ve altered our original destination of “straight to the Florida Keys to zig-zag back for 6 to 9 months”.

Now it’s “leave for a month or two (tops!) at a time to come back and spend a week with the grandson”

Luckily for us, the kids have property with enough room to park our RV. In MY mind, we’d be the most convenient babysitters ever!. Hopefully baby momma and daddy agree.

And our little grandson Casen came a couple of weeks early (October 28th), so he’s just arriving at that perfect baby age and we haven’t had nearly enough time to spend with him.

So it looks like we’ll be hanging pretty close to the west coast for our first year of full time travel. Which, truthfully, is a little less intimidating than venturing for 9 months into completely  unfamiliar territory. This should give us some time to get things dialed in. And never more than a month or two away from our stuff in storage in case we forget to pack something important – like high heels!