The weather’s been amazing, we had some wonderful company, we saw tons of marine wildlife, and we really hate to leave. But such is the life of a traveler! And we will be back to this spot for sure.

After four nights dry-camping in San Luis Obispo (in a field at the Central Coast Renaissance Fair), we moved to a campground near Hearst Castle in San Simeon. Aptly named Hearst San Simeon State Park. Midway between the town of  Cambria and San Simeon Bay, it was a great location. Unfortunately, I did not take the time to get a pic of our campsite.

Tom & I have both been to Hearst Castle before and fighting the summer crowds doesn’t appeal to us, so that was not on our list of things to do. But while driving to the campground I saw a sign for Elephant Seal Beach, just a few miles away and we had never been so I wanted to check it out. 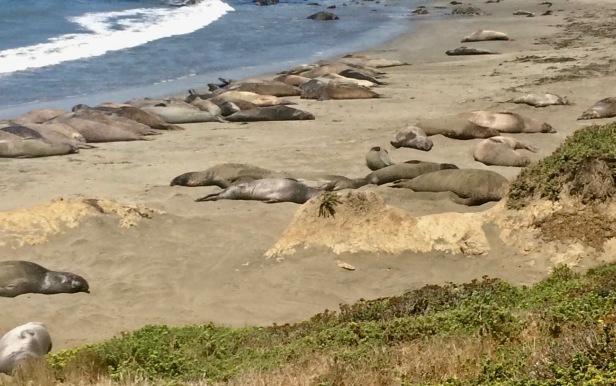 Turns out there are only about three elephant seal rookeries on our side of the world and this was one of them. The almost extinct seals began arriving on this particular beach, near the Piedras Blancas Lighthouse, since 1990 and their population has increased dramatically.

I had taken my kids to Cambria and Hearst Castle in their youth, but all those times and I had never heard of Elephant Seal Beach. The first thing I did after visiting was to tell them both how sorry I was for never taking them! It was really awesome and there were people from all over the world there. 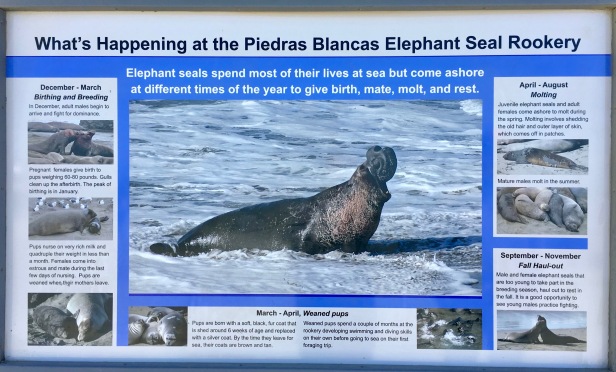 Turns out you can set your calendar by their arrival and there are some of them there all year long. This time of year the older (larger) males come ashore to molt – and the place gets pretty stinky. There are hundreds on the beach at this time and around January there are thousands. That’s when the females come ashore (haul out) to give birth. Then around March the mothers abandon their pups on the beach and leave to go back to the ocean.

Around November is when the adult males return to stake out their piece of the beach. That’s when it gets pretty noisy and violent as they’re all competing to see who gets to be king of the mountain – or beach. 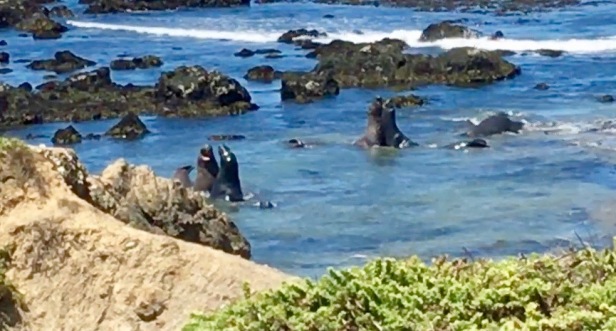 On this trip we witnessed the younger males sparring – in preparation for their future returns. They can weigh over two tons! It was very interesting. We will return to that beach for sure!

There is where I saw a brochure for the lighthouse tours, and we had never been to a lighthouse, so we made a day of that. It was quite interesting as well, but the area is also a marine preserve, so we got a lot more information about the elephant seals and the sea otters. We also saw sea lions and harbor seals all over the place. 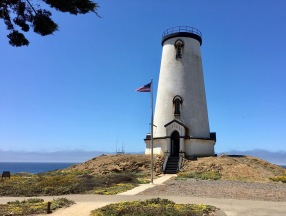 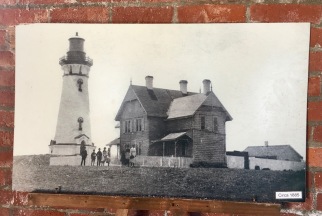 The way the lighthouse property was turned over from one government agency to another over the years was interesting, and it’s too bad that the top of the lighthouse had to be dismantled. I’d recommend the tour to anyone in the area.

We saw plenty of sea otters in Morro Bay, where we went a couple of times. 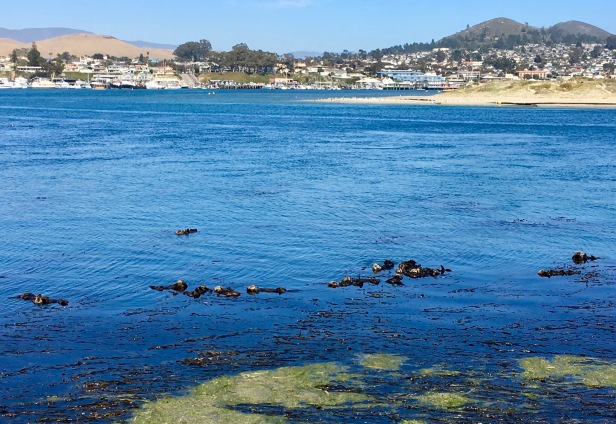 One of the coolest things ever happened while we were in town window shopping on one visit to Morro Bay. We went into a little shop on the embarcadero and were greeted by a lovely young woman named D. We began a conversation and come to find out she knew Tom from the Cosmic Corral (our former store). Once she made the connection, she said “You’re the reason I’m here!” Turns out she was in the store with friends during the closing days lamenting where they would find a place to shop.  Tom told her (according to D) that they didn’t need to worry because she would have her own store in a few months. Crazy, right? Who knew he could make such great predictions? We wish great things for D and her store. Here she is: 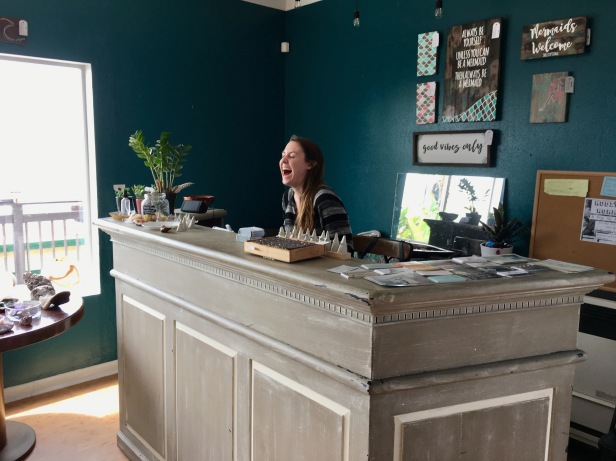 We also visited the east and west villages of Cambria a couple of times (once while there was a nearby fire threatening the town). 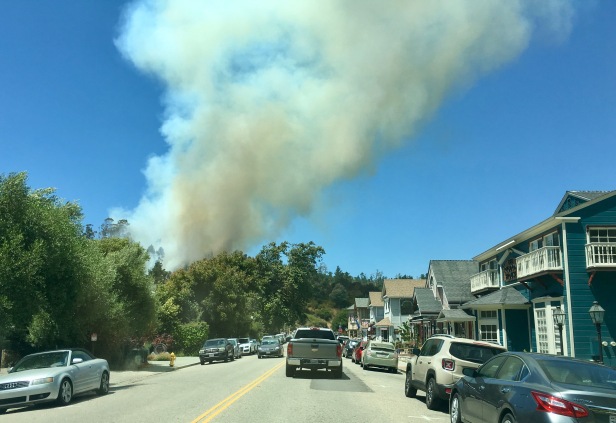 We took several strolls along Moonstone beach checking out all of the driftwood huts, once making the trip by foot from our campground – an almost eight mile round trip! 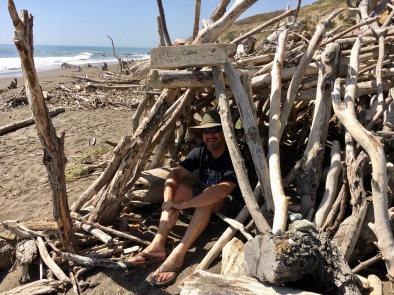 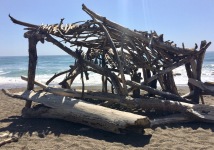 Have I mentioned that I love the Pacific Ocean?

I knew that Highway 1 was closed north of Ragged Point (the next town North of San Simeon), due to a massive hill slide in spring, but I wanted to drive it anyway, so I talked Tom into going to the end of the road just so we could turn around and drive back. 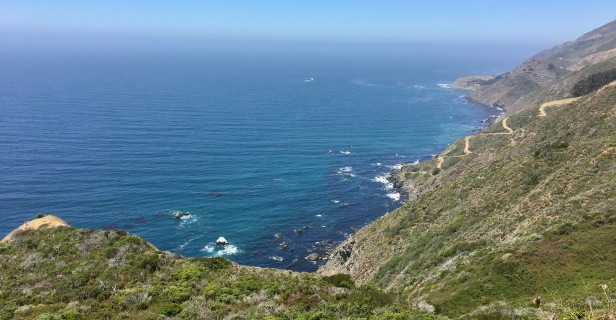 Who knows how long that stretch of the coastal highway will exist? They are already constructing new portions of the highway that are more inland. You can only fight against Mother Nature for so long!

One night we drove the hour trip into Pismo Beach to meet up with some new facebook friends who treated us to dinner at the famous McKlintocks – thank you SantanaRVing! Ray and Tom used to work together way back when and they reconnected on facebook. He and Pam are planning to become full-time travelers in a couple of months and I’m already looking forward to seeing them again in Quartzsite next January.

Tom’s newlywed daughter and her family came over to tent camp with us on the weekend, so that was a real treat as well. We BBQ’d hamburgers and the grandkids roasted hot dogs and marshmellos and made ‘smores. Plus we got to go the beach both days with them as well. Grandparent heaven! 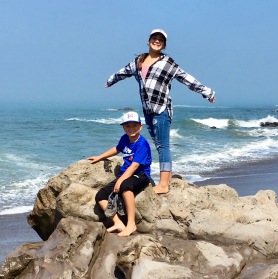 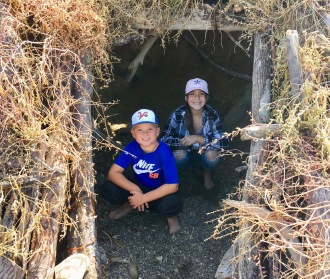 While we were in Cambria on a coffee run, we all walked up to Nit Wit Ridge – an interesting structure built in the same era as Hearst Castle. It took one man fifty years to build his castle out of cast offs and re-purposed junk. The current owners give interesting tours, but the timing didn’t work out for this trip, although Tom & I had taken the tour before. 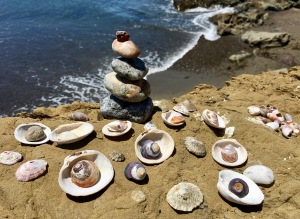 We checked out today (Monday) and finished our trip with a short hike to a new beach where we climbed some rocks and did some beach combing. There is no more bringing our treasures home, so I just arranged them and took a picture! Our last stop was in Cayucos. We parked in the exact same spot we parked almost four months ago when our adventure began! The weather was perfect and we spent over an hour watching a young Humpback whale feed so close to the pier and beach and kayakers it was amazing!

Now we are on the road again. Heading from a week at the coast to a week in the Giant Sequoia Forest in the Sierra Nevada Mountains. California isn’t so bad after all! I’m teasing because we are still itching to get away from our ex-hometown state. But’s it’s really nice to be able to take time to explore everything we were so close to but didn’t have time to enjoy.

2 thoughts on “Leaving Our Coastal Home”