As we continue on our “big trip” we made the decision to park the motorhome in strategic locations and travel by Jeep in a roughly one hour radius to see things. That made more sense to us than to try and maneuver our home here and there.

So that was why we left our home parked in San Antonio and took the Jeep to visit Austin. And since we were taking a road trip, we decided to hit Luckenbach – because anyone who’s a fan of country music – why wouldn’t you want to go there “to get back to the basics of love”? So we set out early with a rough plan.

Had we researched it a little better, we might have gone to Fredericksburg as well. Turns out we were pretty close, and after I researched it – after the fact – it sounded interesting. Ah well, next time.

Rain was predicted, but in the morning it was just a drizzle that turned into a heavy misty fog, So as we drove the scenic drive to Luckenbach, we could barely see  the sides of the road. We were out in the boonies, and hadn’t researched the “town” of Luckenbach or we might have known that it would be easy to miss. You see, It’s not a real town. Not anymore. It’s privately owned and has a population of three. While there’s still a post office on the property, it’s no longer functioning.  We had to turn around twice to find the turnoff to the town i.e. the driveway on to the property, Basically we were driving into a large field marked off for parking – enough for a really large event. Well it turns out that is what the “town” is about – really large events. The day we arrived they were gearing up for a three-hundredth anniversary parade and party.

We walked in down the trail and there’s a large barn of restrooms on the right, and an empty kissing booth on the left. Straight ahead is the old post office and a general store with a bar in the back. Across the yard from that is the famous dance hall – a big barn with a stage. 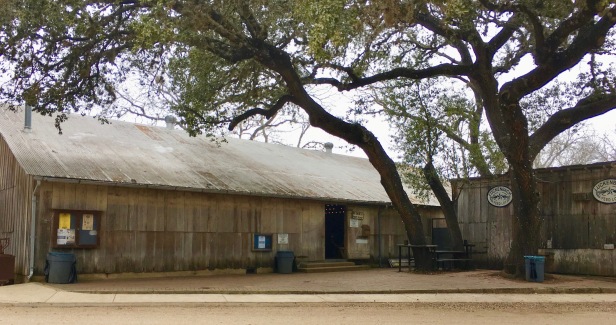 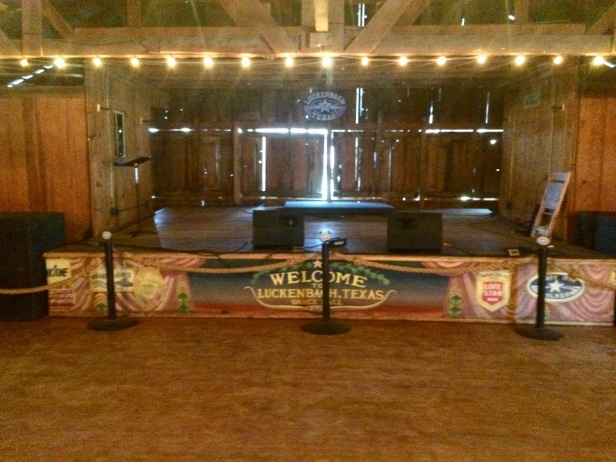 There was a nice fire pit, a couple more outdoor bars – one doubled as a chicken coop –

and an outbuilding that had cowboy hats for sale. 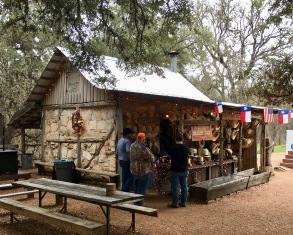 I don’t know what we were expecting, but this wasn’t it! And we weren’t the only ones: I overheard someone ask “Where’s the town?” and the reply was “You’re in it!” 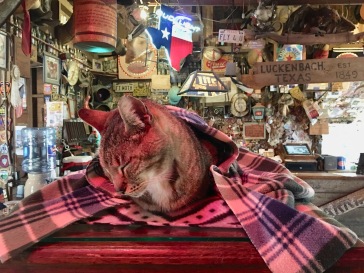 But we had a nice time, met a couple that came from Ferndale, California, and pet the resident cats. It was too early to have a beer, so we went on our way to Austin.

Earlier in our travels, when we told people we were going to Austin, the general response was, “Why?” And Tom’s answer was “It’s home of the blues” So the plan was to hear some good music. But we didn’t research it enough to know exactly where to go to do that.

Researching on the fly, I found the Broken Spoke Saloon – “Last of the true Texas dancehalls”. They had a mini museum inside and things like an autographed Willie Nelson guitar decorating the walls. There was also a lot of George Strait memorabilia – especially in the ladies restroom! EVERY Saturday night they teach line dancing in the big dance hall there. It was interesting, and they did have a guitar playing singer there, but we didn’t stay long.

We drove back into the city center to try and find the happening place. We were amazed at all of the new construction and all the lots with food trucks on them. 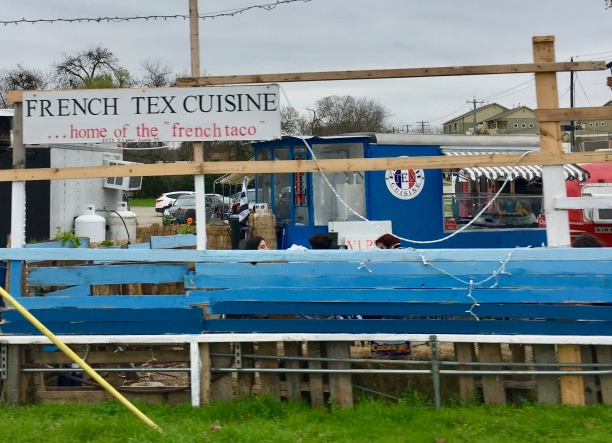 We found a bar that Tom had read about – Antone’s, but it wan’t open until night time.

So we walked down to the river  – which was NOTHING like San Antonio’s river through town – although we read they have plans to improve the area. There was a cool bicycle sculpture there: 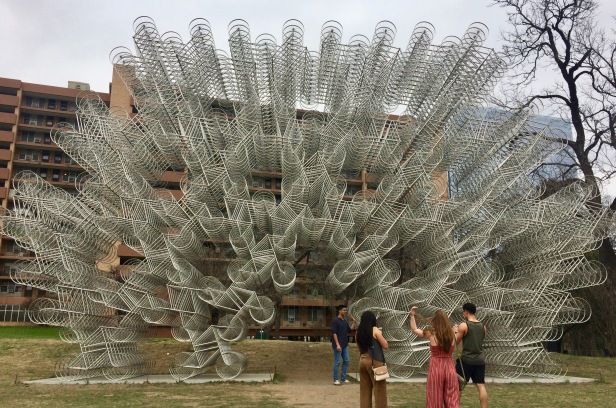 Then we had fried chicken at the world famous Gus’s and walked back to the parking lot. It started sprinkling, but on a hunch we walked up the street and found it: Sixth Street. The motherlode of happening touristy honky-tonks we’d been searching for. Nothing but bars and bands up and down the street and the bands were on the street side with open windows so you could hear them everywhere. 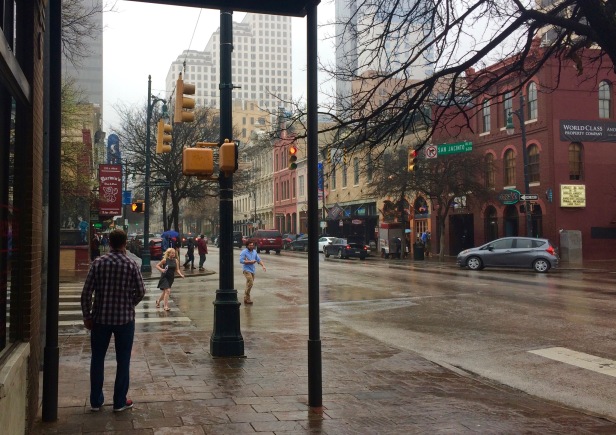 But we didn’t stay and partake. One, because the place was packed with twenty somethings and we figured it would get a bit rowdy. But mostly because we had to be somewhere.

The day before our friends told us that some people we follow on youtube were having a meet and greet – in Austin the same day we were planning on being there! So we had to check it out.

Less Junk More Journey  and Keep Your Daydream  were hosing a gathering at a brewery out by the airport. There were a lot of people there and it was fun to meet them because we all have this full-time RVing thing in common.  These two You-Tubers are families, so there were a lot of young families there as well. We met a lovely young couple that is gearing up for an extended summer trip with their young boys, and a recently divorced dad who is taking his teenage daughter on the road soon. We also met a charming freshly empty-nester couple that transitioned to full time RV in November – Free2RV – among many others. It was a great evening of visiting. We only talked to the hosts briefly because they were being bombarded with fans, but we hope they know we appreciate them “inviting” us.

While our whole plan of getting to soak up some blues didn’t pan out, we had a lovely full day of exploring. We drove back home at night, but in between the fog and the dark we some some lovely scenery and we’re thinking we want to return to Texas’s Hill Country.

Putting up garden harvest here on the homestead!
Grandson’s first day of Pre-kindergarten. They grow up too fast!
Coo county rodeo
Tom found a resting spot!
First place!!
The ground has been broken! We’re committed now!!