Since we started our trip east, I’ve been excited about the swamps and everglades. In fact, two of the things that have been on my bucket list was to 1) have an airboat ride in the everglades (If you grew up watching Flipper, you’ll understand!) and 2) see Coral Castle in southern Florida. Now those two are crossed off the list!

We moved south from Tampa and took the Tamiami Trail (Highway 41) which is the southernmost road from one side of southern Florida to the other. The name comes from the reason it was built – to get from Tampa to Miami. I just like saying Tamiami. If you look on a map it looks like there should be more roads further south than that – until you know that ALL of the southern part of the Florida peninsula is practically underwater!

Leaving Tampa area, we started our trip south with a stop at Naples Beach – which we found to be VERY ritzy. You could only access the crowded beach at the end of a neighborhood street. We parked and walked around town but there wasn’t much to do. 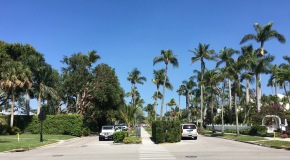 A view of the street from one of the beach entrances.

Beach view near pier at Naples.

We went to the local pier, but could only walk halfway down due to closure because of damage from hurricane Irma. Amazing how much lingering hurricane damage we’ve seen. But the beaches were lovely and the houses were beautiful.

We drove across the state and stayed “on the res” at Miccosukee Casino – named for the local Indians which are closely related to the Seminoles. More on that later. This location gave us equal distance access to  Everglades National Park and Miami, so it was perfect (even if it was a bit warm for no hookups).

We started with a “hike” in the Collier-Seminole State Park nearby. I say “hike” because to me hiking is going up and down and this area is nothing but flat. But we did have a nice walk on a trail through pine trees with Orchid-like flowers (bromeliads) growing in them. 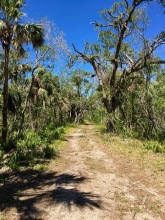 In addition to the alligator (above right) spotted along the trail, I found some bright green snail shells that were about three inches in diameter and very thick (and later found out were invasive Apple Snails) but fortunately, I never saw any of the slimy inhabitants.

We faced the Miami traffic and took the Jeep out to Biscayne Bay Key. We had a nice hike around the park there and went from seeing Miami across Biscayne bay over to the Atlantic side.

This officially completed our drive from the Pacific to the Atlantic.

There was a lighthouse there (that was closed) and the water around the park was very clear. I had fun beachcombing and finding fairy houses along the shore. 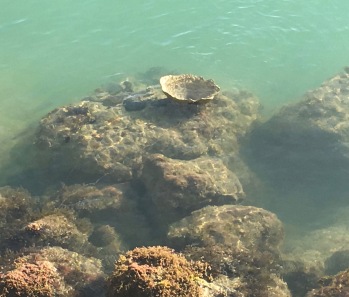 I actually tried to smuggle this sea sponge (above left) back home, but after being locked in the Jeep on a brief stop, the smell was…let’s just say intense – and Tom made me leave it behind!

We stopped at a restaurant on the island and had cocktails and snacks as we watched the  wonderful sunset against the Miami skyline.

Unfortunately, there was no where to pull over on the trip back across the bridge, so I had to settle for blurry city lights pics from the window of the Jeep.

The next day was our airboat ride. We chose Everglades Safari Park both for its location and price. We went on the first tour of the morning to beat the heat and enjoyed lots of bird, turtle, and alligator viewings. At times we were in only two or three inches of water. 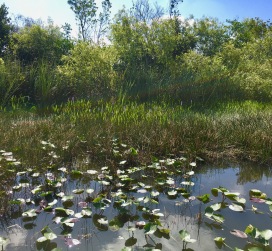 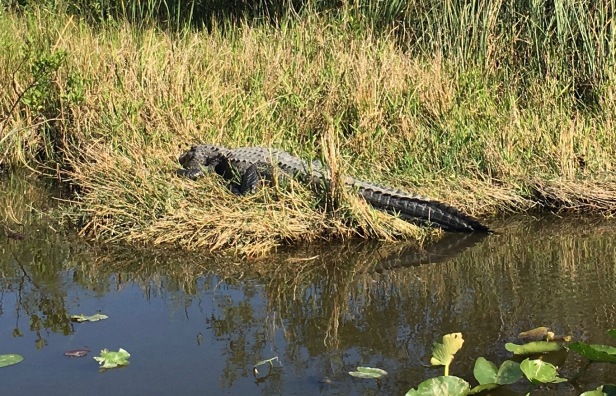 They also had an alligator and reptile show, and a nice boardwalk to enjoy when we got back. We chose not to pay the $3 to have our photo taken holding the baby gator.

Then we took the short drive from there to Everglades National Park. They offered tram rides and bike rentals, but we chose to walk and therefore we were able to enjoy many fish, gators, turtles and plants along the river that others were rushing past without seeing. 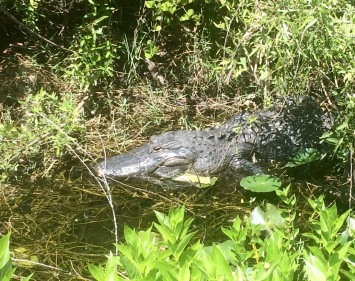 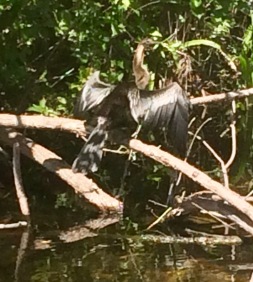 As long as were were being touristy in that area, I suggested we go to the nearby Miccosukee Indian Village and take a tour. It’s my preference to pay for something like that rather than to drop dollars in their casino.

It was small, and not well attended. They had an alligator wrestling show that no one there was interested in seeing (including us), but they have a really nice museum and different craftspeople working in the huts or “Chickees” that are set up as a functioning village.

We found it kind of ironic that the bead-maker was from Mexico and the silversmith was a Navajo. But the guide had lived in the Everglades her entire life. I had so many questions! More people should visit. They have an incredible history and are the only American natives (along with the Seminoles) that acquired sovereignty.

Late that afternoon it was too warm to return to the RV, so we thought we’d take in a movie as we hadn’t done that in quite a while. Well, that was a mistake! I picked a HORRIBLE movie (The Quiet Place) and between the cost of the movie and the popcorn, we could have had a nice steak dinner. So much for overpriced Miami cinemas.

The day we left, we got an early start to stop at Coral Castle in Homestead Florida on our way to the Keys. If you don’t know anything about this “eighth wonder of the world”, check it out by clicking here . Here is also some unique vintage footage (click here).

Being the CT that I am, I already knew about the mysteries of this place and we were excited to see it in person. It didn’t disappoint. No matter what your opinion is of how it was built (and there are MANY), it is wonderful to see and experience. 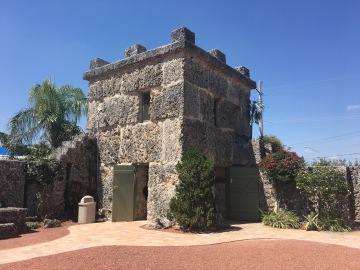 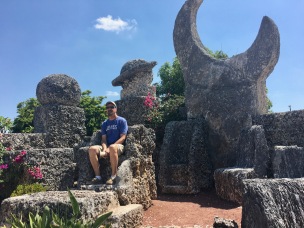 The tour guides are great, and you can follow on the guided tour or just wander about (we did both). Below are pictures of Tom standing with a life size image of the 5′ tall builder, and at the revolving door, once pushed open by a single finger. 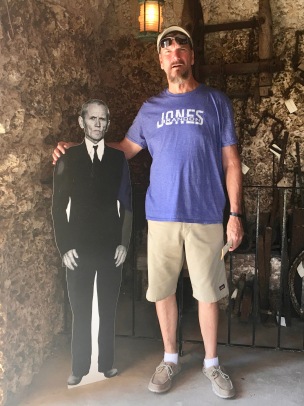 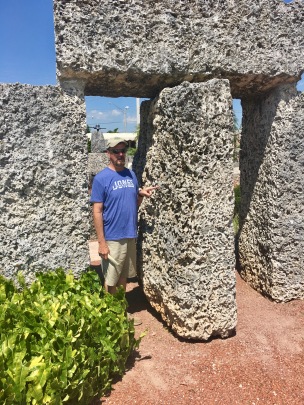 After that interesting stop, we retreated to our air-conditioned rig and drove off to our next destination: The Florida Keys. 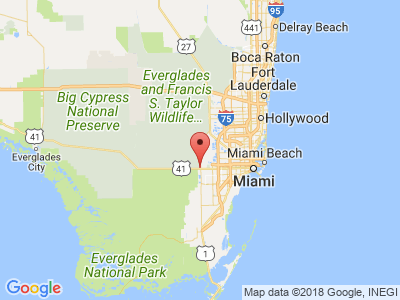