After leaving the convergence and the partying behind, we settled into a couple of days of some much needed R&R. Especially since I got a cold at the end of the Mexican trip and Tom caught it as soon as we were back in the USA. Time to slow down.

We had planned to go back to Quartzsite to meet up with our friends that didn’t go to Mexico, but first we spent a couple of nights outside Yuma on BLM land. We needed to go into Mexico (at Los Algodones) to get dental maintenance done.

While camped there, we met another couple coming from the San Felipe Convergence. In a brief visit we told them where we were headed and they asked “Are you going to the surprise birthday party?” and I said “No,” thinking  of course not.  We hadn’t heard of anything and we wouldn’t know the same people they know anyhow.

Around that time our friends sent us a photo showing them with other mutual friends in Quartzsite and said “Look who we ran into at Beer Belly’s!” (bar in Q) and I thought, oh good, there will be even more people we know there when we meet up.

When we pulled into the designated site (mile marker 99) I was pleased (but not surprised) that there were so many people there that we knew, including our new Canadian friends that we met in San Felipe.

After hugs all around, I returned home to get some work in before we would meet them again for an early happy hour. While at my desk, I saw a red balloon float by. Odd, I thought. Surely it had nothing to do with my birthday the next day. Of course not, I thought.

Later, we took our chairs out to happy hour. So nice to have such a great group of friends gathered – by happy accident – I thought. Then my two good friends Patsi and Pam said we all had to go over to Patsi’s trailer to see something strange they found. That is when I first became suspicious.

Yep, they got me. SURPRISE! They had balloons and cake and great food set out. It was such a wonderful feeling to have friends go to all that trouble. I SO appreciated it. And yes, Tom sneaked it right by me – although he thought they were caught when the couple asked if we were going to a surprise party in Q. But I was clueless. And ever so grateful and honored.

After a day or two the group quickly dispersed – everyone going in different directions – until it was down to three rigs. The Santanas, Mark & Patsi, and us.

The weather in Quartzsite  in mid-February was cold and windy, but it seemed to be the best around. The  Santanas left to Benson, AZ where they got several inches of snow! We decided to stay put until the weather got better.

The big tent show was over, but the vendors were mostly all still there. With our friends Mark & Patsi, we poked around some shops, had some pizza in town, and did some hiking. We hiked to the top of Q mountain to get a nice overview of the town. 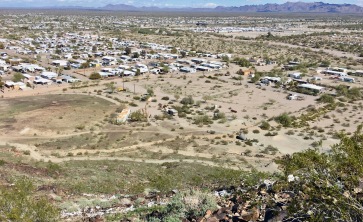 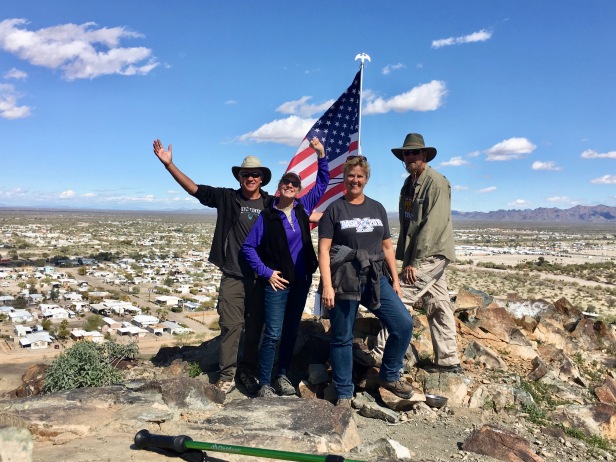 We all drove down to Los Algodones again for the day and Patsi and I got haircuts. When it was time to leave, the line to cross back across the border was about four hours long! 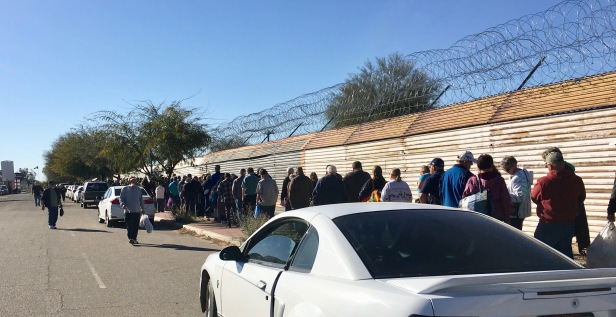 We couldn’t believe it – we’d be getting home around eleven pm. Patsi and I talked a guy in the car line to give us a ride across. That worked out well!

One day we all took a drive along the Colorado River and hiked around the Cibola National Wildlife Refuge. It was a beautiful “picture day” and the river reflected it. 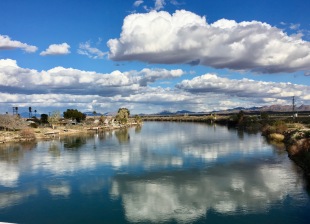 Some nights were spent around the campfire, and when it was too cold we retreated inside and played games – like Stix and Yatzee and Pegs & Jokers.

Just a fun and relaxing couple of weeks. We all spent a lot of time planning where we were going next. Tom and  I had upcoming commitments  in Phoenix and Tuscon, but after that had no plans until our next convergence in Moab in March. Mark and Patsi had commitments to get to in Iowa and South Dakota. I was hoping we could travel together, but we couldn’t make it work. So we finally had to part ways.

I’m sure I’ve said it before, but I just have to say again how surprised I am that we have such great friends while traveling full time. I still can’t believe they gave me a birthday party in the middle of the desert!