Our goal for this “trip” – and by trip I mean our time between obligations back (ex)home in California – was to get to Box Elder in South Dakota in order to complete our “move”. By move I mean changing our legal domicile state from California to South Dakota. Box Elder is right next to Rapid City, which is on the western side of the state. However, ever since a work mate of mine showed me pictures of Sioux Falls, I’ve wanted to go there.

So we came up to South Dakota (SD) from Nebraska towards the Eastern side of the states. We crossed over the state line, which is the Missouri River, at Yankton. This was the furthest East either of us has ever been (by driving). I’m not sure why, but I was very excited to see the Missouri. Although we didn’t have time to stop because we were headed to a camp spot closer to Sioux Falls.

Our first night in SD didn’t start well. We got the motorhome stuck while turning too sharply into the town’s campground. Sorry I didn’t get any pictures….it’s never a good idea to break out the camera when catastrophe hits. Luckily, there were a couple of men from Missouri camped there that immediately came to our aide, and between them using their Suburban, and Tom driving the Jeep, while I drove the motorhome, we got pulled out. Here is the damage we did to their town’s road (sorry cute little town of Freeman).

We also did some slight damage to the RV, including bending the frame on the back flap (that hangs underneath behind the tires). Tom had to take off the flap because it was dragging, and the next day we searched for someone to bend back the square tubing it’s attached to.

So, we found a place in Sioux Falls, which luckily was right across the street from Falls Park, which I had planned for us to see and explore.

So the RV spent a few hours at the welding shop while Tom and I walked around the park. We even had some extra time to drive around the town’s beautiful historic district and visited their free museum.

I didn’t get the picture, but I saw a piece of tree – more than two foot in diameter – with a twisted steel beam sticking through it from a past tornado. A vivid reminder that we were in sever weather territory.

The welding shop guys ended up fixing it up for $15. Big shout out to Quality Welding and Manufacturing.  All is well again (mostly) on the RV.

The falls were really neat, but it was a very hot and humid day. I was happy to be on the road again with our air conditioner going. Now we were heading back west across Highway 80. Sioux Falls, check.

The next point of interest was the Corn Palace in Mitchell, SD. Kind of cheesy, but we did the (free) tour and it was kinda cool. The towns people are quite proud of it, but there wasn’t much else going on in Mitchell. 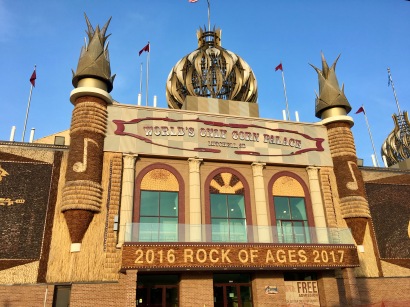 Except for these yarn wrapped trees. Not sure what that was about! 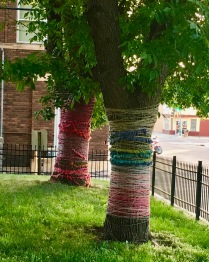 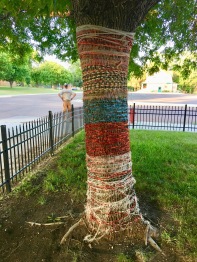 Our next stop were camp grounds by a dam right on the Missouri River. It was so hot and windy that we stayed in all day. That night we experienced our first tornado watch. We were afraid of hail of course. The winds buffeted our rig for most of the night and we were up in the middle of the night checking the radar. But thankfully, we only got the bottom edge of the several cells that passed through. I  have never experienced lightening like that. I’m used to flashes or bolts, but this looked like someone was flickering the lights off and on. It was non-stop lightening for hours. The rain came in waves, but thankfully the much anticipated hail never hit us.

In talking with the neighbors the next day, and hearing of their encounters with tornado warnings, we learned a valuable lesson. ALWAYS unhitch the tow vehicle.

We always have, but this was a pull through site, in the middle of nothing interesting except for the fishing, and the first time we stayed put for a couple of days. So we left the Jeep hooked up.

But the neighbors told us about the time they were awakened in the middle of the night and told to go to the vault toilets for protection. They said “We are NOT going to die in a vault toilet” so they got in their towed vehicle and drove to someplace safer. Moral of the story: if we ever have to leave in the middle of the night 9for whatever reason) we will want the Jeep to be unhitched and ready to go.

It was nice to have a couple of down days with nothing touristy to do or any local towns to explore. But we were on the road soon enough: Destination – Wall Drug.

If you’re driving along Highway 80, you see sign after sign advertising this place. The original owners of the drugstore in Wall, SD were master marketeers, and began offering free ice water to anyone who stopped by. The thing has grown into this block sized “attraction” and it is a must see. Lots of kitschy photo ops. Tom liked the Jackalopes!

Wall is also one of the entrances into the Badlands National Park which was on our list. We spent a whole day driving and hiking around the park. 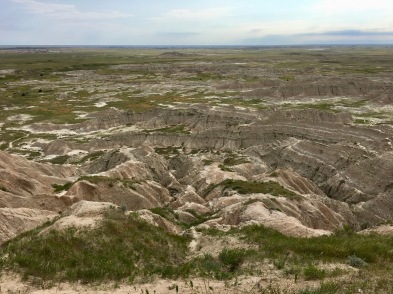 We saw some Buffalo, some Prong Horned Antelope and Big Horned Sheep, and prairie dogs galore. the scenery was awesome.

It reminded me a lot of the Painted Desert in Arizona, except for the prairie grasses everywhere.

It was a really nice time traveling across South Dakota. Our next stop: Our new hometown of Rapid City.