After a day off from hiking, we were ready for more of a challenge. So after consulting our Falcon Guide book, Tom selected a hike to Weaver Lake.

Listed as 6.4 miles out and back, it had a difficulty rating of “moderate, due to elevation gain”. Our campsite neighbor had done it the day before and said it was all uphill on the way (good news for us) and hot and dusty. So it meant an early start. Which worked out perfect because the trailhead was just up the road form our campsite, so no driving. In fact, we were able to make a shortcut to the trail by walking through our campground.

It started shady and along flowing water, so it was really nice. This was also a horse trail, so we had to avoid stepping in the road apples, but we never saw any horse-riders. There were much less people on this trail than we had seen on the others, probably due to it’s longer length.

There was only one guy and his dog that were headed up at the same time as us, but there were several groups coming down. Mostly the ones that had spent the night at the lake.

Weaver Lake is at the base of Shell Mountain, in the Jennie Lakes Wilderness Area. Elevation is  8,560’. Our campground was at an elevation of 7,760’, so we only gained 800’. Not too bad.

It was a very nice nike, but drier and dustier than the others. There were a couple of steep climbs. And by steep climbs I mean spots where I had to stop often to catch my breath. Tom sailed right up. Towards the end, it was pretty flat and we were visiting, so when I spotted the lake I was surprised that we were there already. Just a couple of small groups of people were there and it was beautiful. 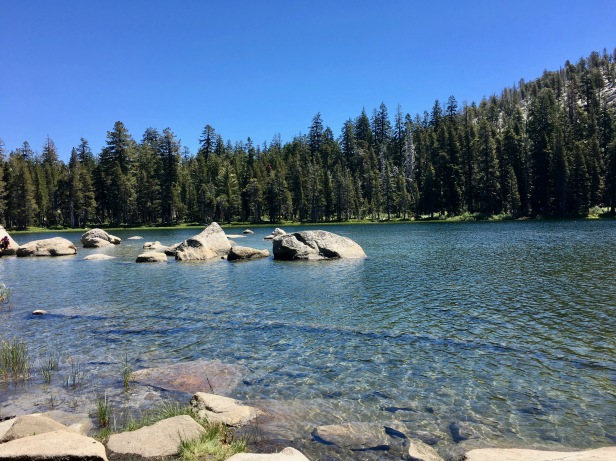 The lake was crystal clear. Warm enough to swim in. We didn’t but others were. We took some time to have a snack and walk around the lake a bit. But we didn’t want to linger too long because we knew the hike down would be sunny and hot.

It wasn’t bad at all on the way down, and my legs weren’t really feeling it until the last mile or so. Luckily Tom brought along our InReach device. A stallite-linked GPs tracker that gives us elevations and speeds and leaves digital breadcrumbs so we know exactly how far we are from our starting point. Or maybe that last mile was longer because I KNEW it was the last mile!

Anyhow,  I’d rate it as a success – and our toughest hike to date! Sorry I didn’t take photos along the hike – I was concentrating on making it up and down!

It’s so wonderful to be able to hike to see things – such as Weaver Lake – that most people who visit the National Parks don’t get to see.