When Tom told someone last month that we were headed to the desert and would stay there a month, my thoughts were, “Well, we see.” I wasn’t sure I could handle it that long. I was mostly thinking about the weather i.e. cold. But the weather’s been pretty good and we’ve been out here in the Mohave desert for almost a month.

We had a couple of weekends spent with friends, but for the most part we’ve been by ourselves. We didn’t do a whole lot of riding (in the RZR), but even if we would have ridden 10 hours a day every single day, we could have never gone on the same trail twice. It’s hard to explain just how vast the southern California desert is.

We have a family story about a relative that died on the trek west in the 1930’s and they had to bury her in the Mohave. I remember that story and I think that if anyone wanted to dispose of a body, there is sure plenty of room to do it in the desert. And except for the weekends, it is all pretty deserted. The area is immense.

After getting back to our home from our trip to Tuscon, we moved back to our spot at Wagon Wheel for a couple of days getting some computer work done because the weather turned nasty. Windy and cold. But it didn’t last long.

Then we moved our rig to a place called Dove Springs OHV Recreation area off of Highway 14. It was our first time camping there. The immediate scenery didn’t change much, except we got out of the rocky area and camped next to large electrical wires. We didn’t want to take the RV down the dirt road any further than we had to.

Tom said there was lots to explore in the area, so I was looking forward to getting back outside.

We had some great rides. One through Red Rock Canyon state park to a watering hole called Jawbone. We’ve been there before on a big weekend and they had live music, but this time the place was empty. 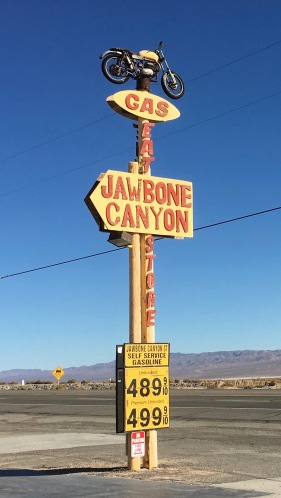 We finally found Burro Schmidt Tunnel – it was much easier from the Highway 14 side. We have been on a couple of rides from the other side of the El Paso Mountains, but had breakdowns both times. So we were happy to make that trip without incident. It’s a mining tunnel dug through a mountain and we remembered our flashlights! It was very cool to walk through it and come out on the other side of the mountain. 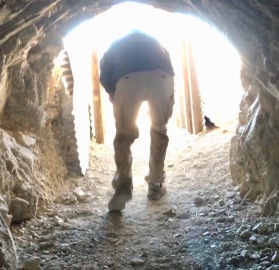 We also rode to some talc mines in the area. They used to mine the talc from the mountains and they left giant caves carved into the soft stone.

One mountain had 16 different holes or caves in it. They reminded me of something you’d see by the ocean. 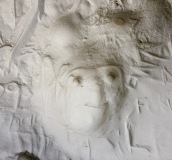 There were several cabins in the area that we explored.  Some were in ruins, and some were stocked with supplies (first aid/paper products/food/alcohol) . 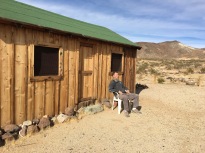 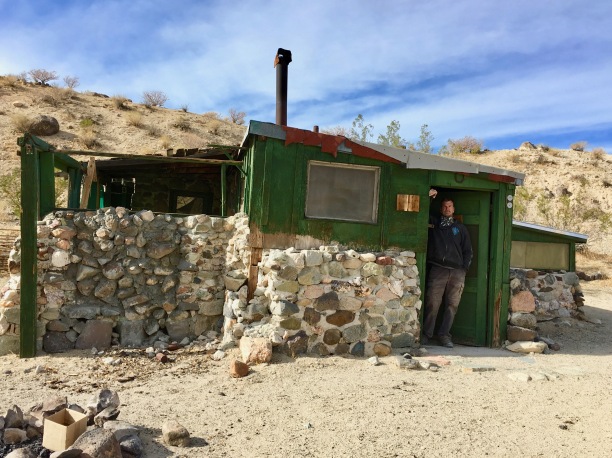 We were amazed how in tact everything was. The people that come through obviously respect the properties. No grafitti, no broken windows. No theft of the Tequila. 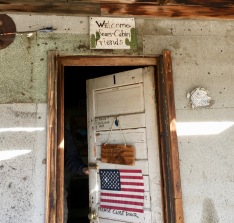 The most interesting was the Bickel homestead and mining camp. If you peek in the (locked in this case) cabin, it looks like the guy just left. There was signage up about his life and claim and how the BLM was coming in to evict him on the same day he had a stroke. Unfortunately he spent the last 10 years of his 93 year old life in a convalescent home, but fortunately the authorities didn’t come in and burn down the buildings (as the reports said they had at other camps). In fact there are “docents” that apparently stay out there periodically to keep an eye on the place. There was a small village of abandoned RV’s and it looks like some are still being used. It was all quite interesting. 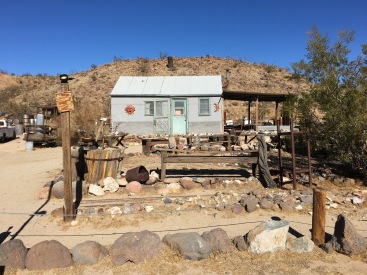 Yes, we had some great weather, nice rides and interesting things to explore, but I have to say I’m tired of the solitude. If you ever want to get away from people this is the place to do it. Myself, I’m ready to move on to something populated.

And to get away from the High Voltage wires that we’ve been camped by. Not sure it was a great idea being so close to the electricity. We stayed in one day because Tom woke up with vertigo – for the first time in his life. It may be pure coincidence, but I still feel those wires were messing with our bodies.

So on we go through the Kern River Canyon to Lake Isabella.