This is our ninth night in Tuscon and we are itching to get moving. We have been here waiting for the Jeep to be repaired, and it’s taken longer than we expected. Which is okay. We like Tuscon. It’s where college daughter Jessica lives, so we’ve been able to spend time with her while here.

We expected to leave yesterday, but it turned out serendipitous that we didn’t. Today (on the one month anniversary of the Jeep getting broken into) Jessica’s car got broken into. Same parking lot. Same MO. Fortunately, she had nothing of value in the car, and they weren’t able to steal hers either. But they made off with her battery and left it un-drivable due to the steering column damage. We were glad we were here to walk her through her first 1) police report 2) insurance claim 3) triple A tow 4) car repair, and generally just to be here for her.

Fortuitously, the Jeep is in a shop just a couple of blocks from where she lives, so we already knew where to take it. They now jokingly call us their best customers! It’s a great shop (BIG shout out to Von’s CarStar) and they were generous enough to give us a loaner car to get around in. And we’ve been using the heck out of it.

Tuscon is a spread out town and we have been all over the place. We’re staying on the south end of town, Jessica lives on the north side, and we have been taking excursions both east and west. Some of those excursions have been to try new restaurants with Jessica, who is a vegetarian. Every place we tried was delicious. I love vegan food – I just wish I knew how to cook it! I think I only cooked once or twice the whole time here!

Getting across town, or even across campus, involves a lot of traffic. So we’ve been in traffic a LOT. This is one car happy place. So for that reason more than others, we’ll be happy to leave.

Although we have definitely enjoyed our time here. There is so much to do in this area. So, in no particular order, here is a breakdown of all of the touristy things we’ve done while here.

Mid-January to Mid-February is Tuscon’s big Gem Show(s). They are quite known for it and it’s hard to explain the magnitude of the vendors and the stones that are here.  There are giant tents set up in every parking lot around, and even the hotels are stuffed with vendors.

Tom and I never made it this far when we had our store, which is probably a good thing because we would have been both overwhelmed and tempted to break the bank on buying. So I figured we had to check it out.

Tom likened it to taking an alcoholic to a bar and telling them not to drink – because he loves stones but couldn’t buy any. But he was a good sport and we poked around one (tiny) area of town that had hundreds of vendors selling much more than rocks. That day was free fun.

Tom and I had visited this before (see blog here) – and we were happy to be able to take Jessica for her first visit. It’s about a thirty minute drive north of her place. In the year and a half since our tour, a lot has changed. It was much more neat and tidy (dead leaves raked up etc). There are two different tours instead of one. We only had limited time, so we took the general tour which talks about how the dome is NOW being used for science experiments and environmental studies. We all felt like so much was left out of that tour, so if you go, I highly recommend taking the extra hour and extra $5 for both tours. 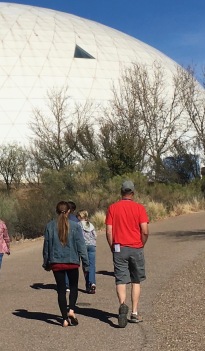 My favorite part about our first tour was the history of the dome experiment – which is the tour we didn’t have time to take. I found it very interesting that they’ve changed the focus of what Biosphere is (was) about. Even their website only talks about the current dome. To me, the social aspect and why the experiment failed to continue is important information. But (in the first tour at least) they leave all that information out. There is a lot of self discovery information to tour, but we were on a rushed schedule to get Jessica back to school, so I’m glad this wasn’t my first visit.

We had tried to tour a missile silo while in South Dakota, but there was a weeklong  wait list, so we were happy to make the twenty minute drive to see this one. There was a lot of information on what was going on during the cold war. Very interesting. The docents were former military personnel who worked at similar missile silos, so they had lots of answers to my questions. 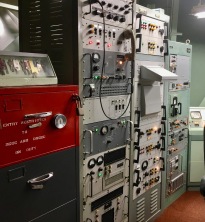 My main takeaway was the amount of engineering and technology that went into the underground building of the missile launch base – which was built in the fifties. The mechanics of it reminded me of the Biosphere – although this site was only set up to be completely sealed off from the outside world for a maximum of two weeks. Long enough for them to pull the trigger of retaliation before we all annihilated each other. Peace Through Deterrence they called it. Well worth the $10.50 per ticket.

We had wanted to go here on previous visits, but the weather was too hot. This time the weather was just perfect. And we went with our friends, Santana RVing, so it was even more fun.

The place is not like a historic old downtown area – rather it’s a film set that was built for a film done in 1940.

Since then it has been added onto and a backdrop for hundreds of movies, tv shows and commercials. In 1960 they opened it to the public, and now it’s like a low key theme park. 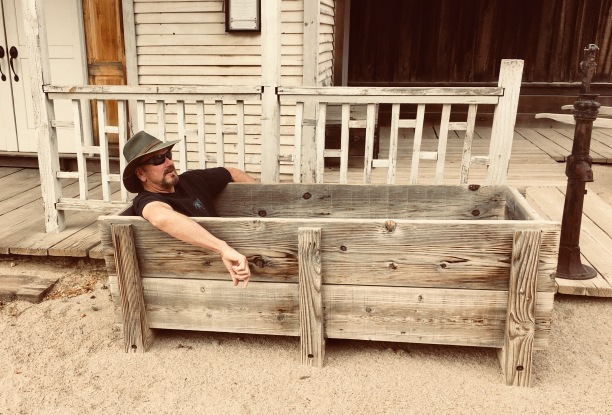 We had a great time acting like big kids taking a ride on the train and driving on the autorama type track and going through a fun-house type mine.

We watched a can-can show,  and a stunt man gunfighter show. We  took a tour of the town showing all the notable spots that were in films, and then just wandered around on our own. 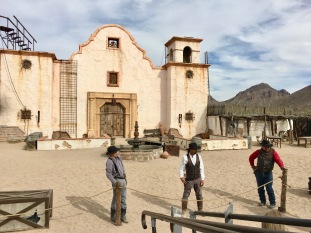 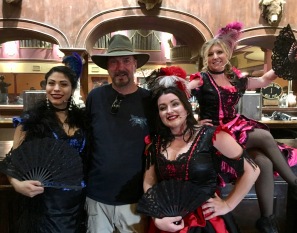 I thought it was a little pricey going in at $20 each, but that included everything there (except the stage coach and horseback rides which we passed on). It was a great day and even though we got there at lunch time, they had to shoo us out at their 5pm closing time.

Again I thought it was a little pricey at $22 each, but SO worth it.  And again we got shooed out at closing, so I paid an additional $5 each so we could come back. So we visited twice – and enjoyed it thoroughly. This part of the Sonoran desert is really beautiful – and why I like Tuscon so much. The plant variety is incredible. 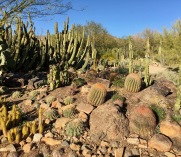 This museum is also part botanical gardens and part zoo. I don’t like the ideas of zoos, but the way they incorporated the animal displays into the actual natural surroundings was very well done and it didn’t seem so much like we were looking at caged animals. (At least that’s the version I’m sticking with.)

Even with two visits and several hours, I could have stayed longer. The cactus garden (and I’m not even a fan of cacti) was incredible.

There was an aviary that had the peaceful sounds of water running and doves cooing, and a separate hummingbird garden where you could almost touch the many variety flitting about. We were fortunate to be there right at feeding time in the reptile house and got to see the snakes eat what i assumed were freeze dried rodents. Lovely.

It was a beautiful place with lots to see and lots of places just to sit and enjoy. It far exceeded my expectations.

While happy to be heading on, we definitely enjoyed our time here.

2 thoughts on “Touristing in Tuscon”