Today we left our travel buddies, the Santanas again as we left Big Bend National Park in Texas. Yes, like everything else in Texas, it was big!

You could easily spend a week or a month there exploring, but we feel like we did what we needed to do before moving on. We feel really lucky we even got a place to stay there.

After a night camped outside of the park (at Terlingua), we got an early start – to make it to the only campground in the park that could accommodate us: Rio Grande Village. (The one called Cottonwood was shut down.)

So the plan was to get there well ahead of checkout time, scout out campsites that would be opening up, and basically stalk the people camped there until they pulled out. Pam’s idea worked brilliantly and we snagged the only spot available that we could fit in.

After we all got settled in, we hopped in the Jeep for drive to watch a movie about the area at the visitor center at Panther Junction. Then on to one of the nearest hikes – to Balancing Rock. 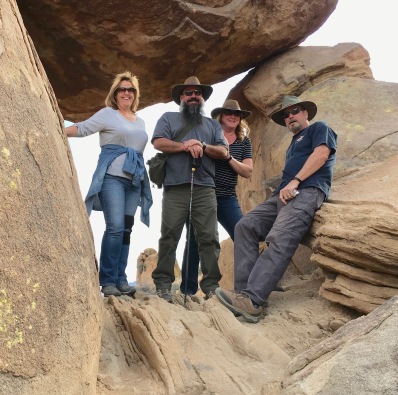 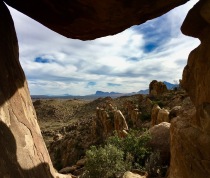 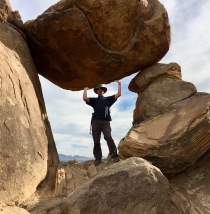 It was a beautiful canyon hike with quite a scramble up the rocks at the end. 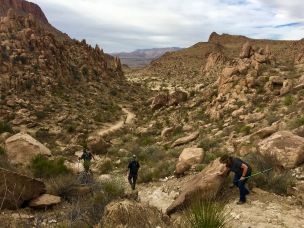 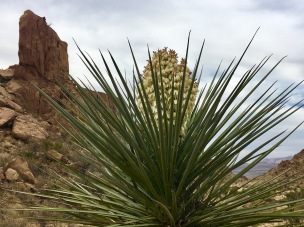 Pam was great at spotting figures in the rocks – like praying hands, dog paw, and cherub.

Returning from that we stopped at an oasis with a windmill and large cottonwood trees – quite a site in the middle of the desert area.

The next day we planned a full day of going to Mexico AND the hot springs – both near our campgrounds but we still chose to drive to them. Boquillas, Mexico is just across the Rio Grande. But you have to cross the water to get there. We paid $5 each for the roundtrip on a row boat, but Pam and I chose to walk across on the way back – just for the experience! 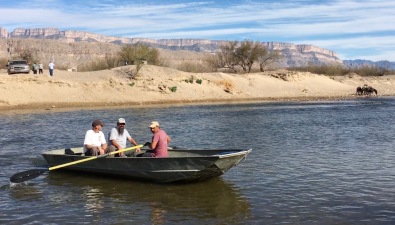 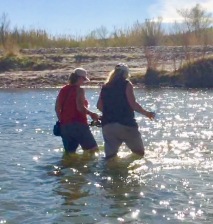 We also wanted the full experience of riding a donkey up the hill to the tiny town. The guys were reluctant of course, but Pam was most enthusiastic about it. Which made it all the more ironic when it was her donkey that decided to lay down in the middle of the road on the way up – with her on it! So she walked her donkey the rest of the way. 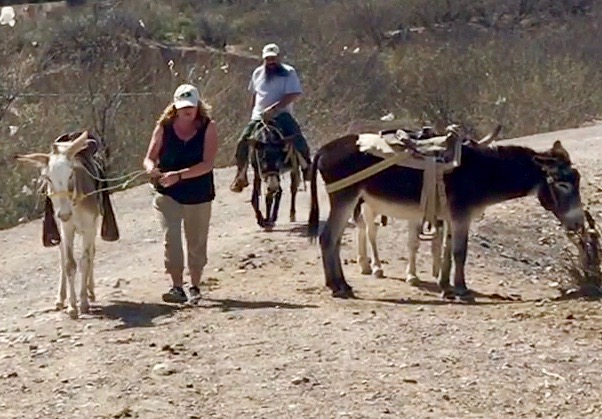 They had guides you could pay to tour the town, but we chose to go it alone – which meant we were on our own with the donkeys as well. You just hitch them up when you get there and grab the same ones when you leave. Theoretically we could have ridden the donkeys through town, but they seemed to know where they should stop – and I think it would have been tug of war to get them to move further.

We had a nice lunch at one of the two restaurants in town, and then did some exploring and bar hopping. 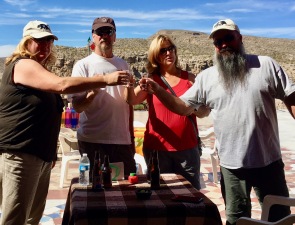 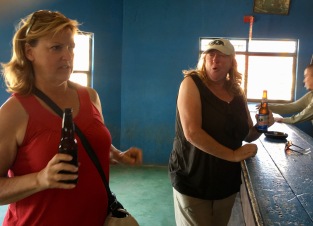 Pam and I played a couple rounds at the pool hall. 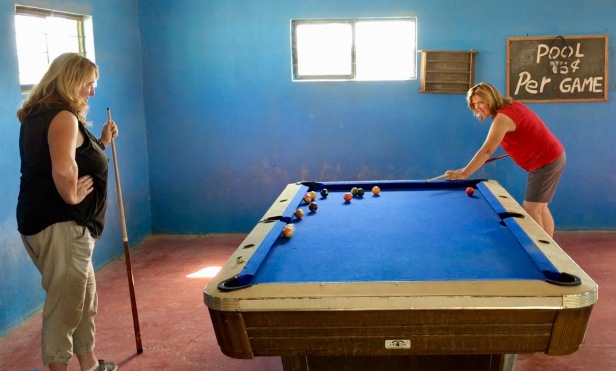 No liquor stores there so we were spared buying more tequilla! Then Tom traded donkeys with Pam for the ride back down.

This border crossing was much different than the one at Los Algodones (near Yuma): We had to check in on the US side before crossing, and we had to check in and fill out paperwork on the Mexican side when we arrived – and check in again with them before we left.

So back to the campground to get our suits on. We could have hiked to the hot springs, but I’m glad we drove. The pool was a bit crowded when we got there, but we stayed until dusk and it thinned out. 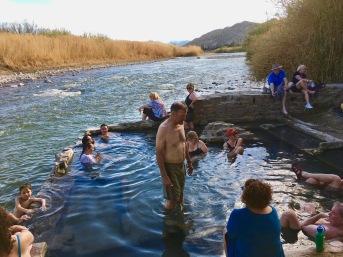 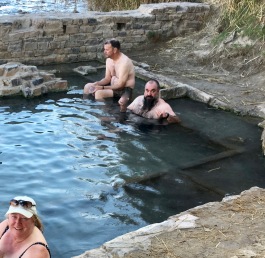 I could have stayed in the pool much longer. By pool I mean a rocked off portion around naturally occurring hot water coming out of the ground with seating on the dirt inside. Then the water poured over the side into the Rio Grande River. Pam and I got out and swam a bit in the river, but the guys stayed put.

It was a long and full day followed with great grilled burgers back at camp.

The next day we took a long drive all the way (back) across the park to hike into Santa Elana Canyon, which everyone recommended. If we had it all to do again, we would have hiked there while staying in Terlingua, because it was a full day of driving from our campground. But it was a beautiful scenic drive with a couple of old towns along the way, so Tom got his fix of old buildings. 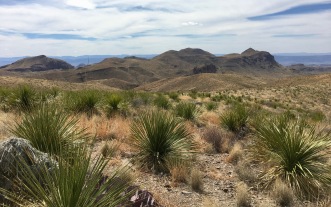 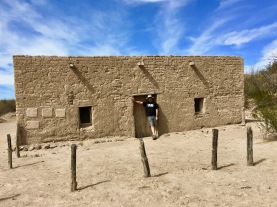 Ray played chauffeur this time and then stayed with the dogs while Pam, Tom and I hiked into the canyon – cut by the Rio Grande. I waded out into the water of course, and we all had fun taking pictures before heading back the short but up-and-down trail. 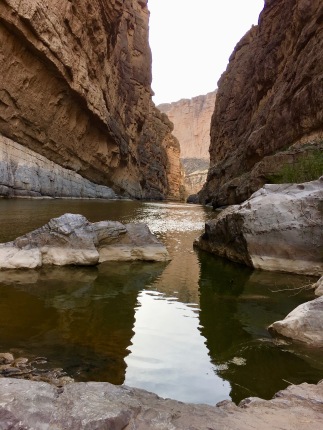 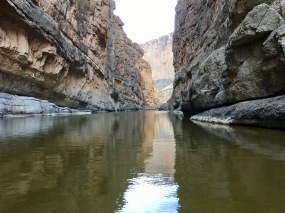 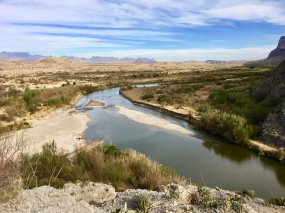 After a nice late lunch at the picnic area there, we all loaded up and raced back around the park so we could get to view Window Rock at sunset. We made it just in time. 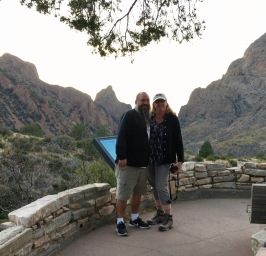 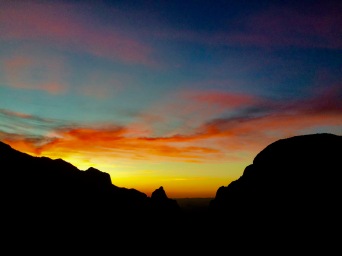 Window Rock is in the Chisos Canyon area and there are a LOT of trails there. Again, if we had to do it all again, I think I would have started there. The Chisos area was just beautiful with lots of large trees. But at least we got to see it and it will be on our list for our next visit there.

We could have stayed longer and done more – especially hiking, It looks like that’s our last chance to be in the mountains for a while. In fact, this leg of our trip east marks the last time we’ll be in the boonies – looks like nothing but towns from now on!