When we first had the idea to go on a full time road trip, my goal was to go straight to the furthest southern place of the contiguous United States: the Florida Keys. Well, it took a little longer to get there than we first planned, but it’s nice to be completing a goal.

In Florida’s Southeast coast, islands are called Keys. “Key” is derived from the Spanish word cayo, meaning small island. And for those of you (like my Mom) who don’t know, there is a string of small islands extending from Southeastern Florida like a comma. They are all connected by bridges or causeways, and extend to within 90 miles of Cuba.

We chose to stay in the middle of the string on Marathon Key. This whole area was hit hard by Hurricane Irma last September (2017), and there is still a lot of evidence of the damage. But the RV park we stayed at had recovered and we had a nice spot with a front window view of the Gulf ocean.

We had a relaxing stay while there and we really utilized the AC. I also took advantage of their laundromat, and swimming pool.

The whole area seemed like a great place to take out the kayak, so after some research I found a place to launch. I did not however take into account the tides. We took it out for a while, be we were dragging bottom too much in the shallow water due to low tides. 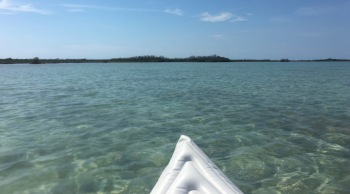 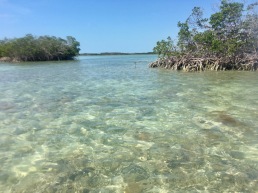 We did have an opportunity to talk to a couple of locals there that (in addition to explaining low tide was not a great time to kayak there) told us of their hurricane experiences. Both parties had homes that were spared, but one person told us that it looked “like winter” when they got back because ALL the leaves were stripped from the trees. Both people also told us that during cleanup there were mountains of debris pilled up on both sides of the entire span of the Highway 1 that were 25-30 feet high – or taller. We saw large boats still on land and mobile homes with sides ripped off, waiting to be taken to junkyards in Miami. It amazes me how much damage we’ve seen as a result of the two hurricanes that I was so fascinated with watching last fall from the west coast.

A trip to the keys wouldn’t be complete without a trip to the southern most point in Key West which is 150 miles south of Miami (and closer to Cuba). It’s an affluent and touristy town. We had no desire to wait in line to take a picture of the marker at the southern point, but I did take a drive by and then took a picture of a tiny replica in a shop window: 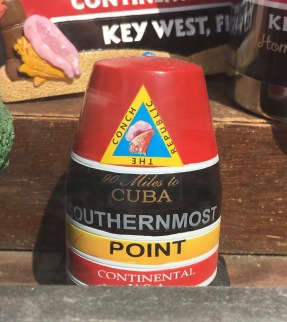 The beaches were crowded and hard to get to, but we did have our suits and beach towels and picnic lunch so we found a spot and spent some beach time – even going into the Atlantic ocean. It was disappointing. The water was warm enough, but not as warm as I thought it would be, and the beach was rocky with broken shells. At first I thought we might want to do some snorkeling there, but the artificial reefs they placed there didn’t look worth exploring. But hey, it was the beach and the ocean and that’s all you need for a good time!

We walked over to the nearby Fort Zackary Taylor and did a quick tour. It was getting hot and humid. 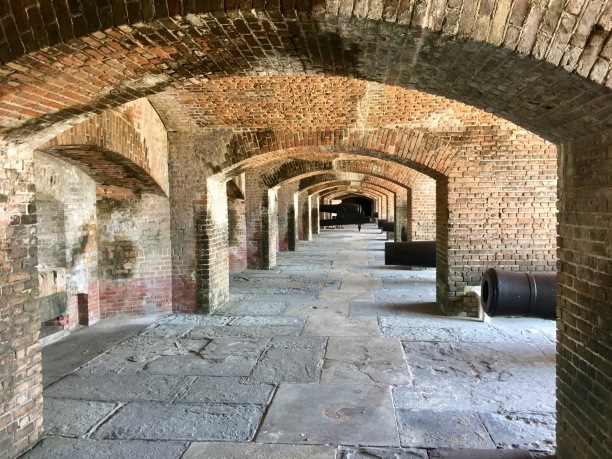 So we drove into the touristy downtown area to the famous Duval Street.

I found it interesting there were roosters everywhere. Tom found other sights along the street even more interesting! 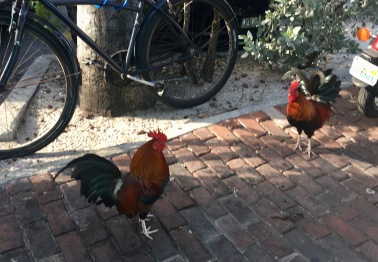 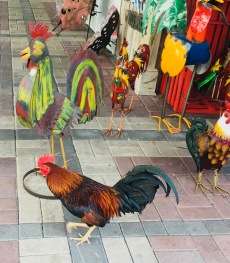 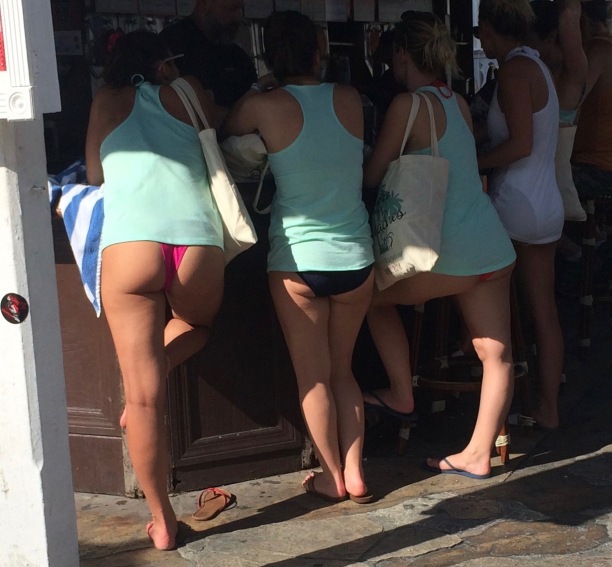 There were several lively bars and restaurants around this area of town that looked interesting. 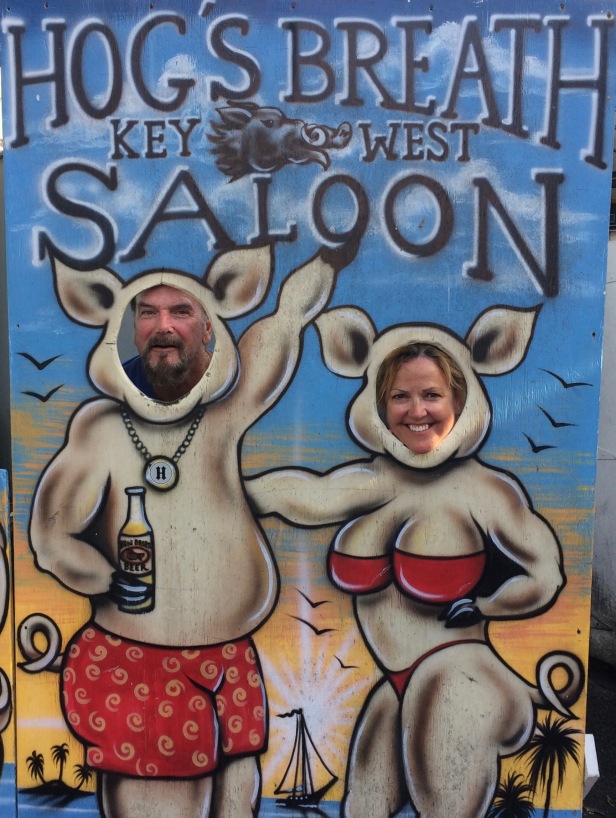 We settled on a nice air-conditioned pub to hang out in, called Irish Kevin’s.

Inside they had a great singer and a large TV with a live feed from a pub in Ireland. This fascinated me and I desperately wanted to get in touch with someone there so they could wave to us. So I spent our time there drinking their famous Green Alligator cocktail while looking up #templebardublin posts on Instagram and sending them messages. I did get one reply, but they had already left the Temple Bar. Still, it was pretty cool.

The weather was turning hotter with thunderstorms expected, but we did get another chance to take the kayak out. The RV resort had a dock and boat launch right by our campsite, so we went out on the last evening for a sunset paddle.

That wraps up our trip to the Keys. Now we will be heading North up the East coast – a direction we haven’t gone in a while! Spoiler alert – we didn’t make it very far north together.