We are members of Harvest Hosts which is a good resource for free one night stays. They can be at a museum, a farm, a winery etc. In exchange for staying there, you are encouraged to attend their tours or buy their products. We always forget to utilize our membership, so Tom told me to pick out a couple of Harvest Host stops as we headed back east across Iowa.

I picked Hansen’s Farm Fresh Dairy in Hudson, and the Buffalo Bill Museum on the Mississippi River in LeClaire Iowa. One night each with no hookups. Luckily the weather turned and we were cool for both nights (because there are no hookups).

We called ahead to both Harvest Host sights. The first (Hansen’s) was a friendly woman that said no problem. The second (Museum) was someone who said they didn’t know how they got on the HH list, but we could probably park in the city park, so we picked a nearby Walmart or Casino for plan B backup. Luckily they both worked out great.

At Hansen’s Dairy, we made sure to arrive before the daily 3:30 tour. We parked by their pond in their large parking lot at the visitor center/store/home of the patriarch of the family. We went in and read the history of their fifth-generation farm started in 1864. Since all four brothers of the current adult generation wanted to return to work on the dairy, they added a creamery to support all the families.

Now the 300 cow farm is totally self sufficient, from growing their own feed, to their own distribution of their bottled milk and products. Coming from a farming and dairy background, I found it all very interesting.

Our private tour (it was just the two of us on that Sunday afternoon)  took us first to see their mascot animal – the kangaroos! They have three and we got to pet and feed them. Strange creatures! 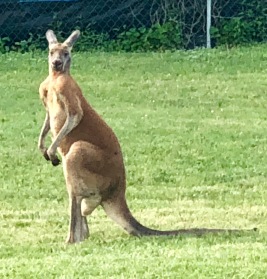 Then we went to the calf barns, where we could bottle feed a baby calf. They name rather than number each female calf. They are very creative with the names and it sounds like all 15 grandchildren get to help with the names.

Then on to the milking barn where I got to hand milk a cow. We couldn’t believe neither one of us had brought a camera along, so I have no pictures. They milk 16 head at a time and the grandkids that are old enough help out in scheduled shifts.

We saw the creamery where they pasteurize (required by Iowa law) but don’t homogenize their milk. They also make cheese, butter and ice cream that they distribute and sell in their store.

Back at the visitor center (which also contained a racquet ball court!) we made butter and sampled their cheese curds and ice cream, while watching a video of their dairy farm. It was all pretty cool, and I enjoyed eating my butter!

Afterwards, we went out to the pond to visit with some of the family members and watch the kids catch fish after fish.  As the sun went down we were treated with the sounds of bull frogs and crickets. It was lovely.

We weren’t sure about the parking arrangements of our next Harvest Host stop in Le Claire Iowa, but it worked out fine. There weren’t any “NO Parking” signs posted in the large parking lot next to the boat ramp – always a good sign! We parked facing the Mississippi River.

Below is a two day riverboat cruise we saw passing from our front window, along with an up close view of one of the many bugs that luckily didn’t bother us much.

Since we first got to the mighty river in Louisiana, I’d wanted to put my feet in it. I just did. But at that end of the river, it’s all cargo barges and levees – very inaccessible. But here nearer the start of the headwaters, the riverbanks are much lovelier. There were even many riverfront houses. And in between all the boats launching and returning in our parking lot, I was able to dip my toes into the ugly muddy water. Check. 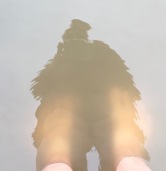 The parking lot was also adjacent to the Buffalo Bill Museum. So named because Le Claire was the birthplace of William Cody. We have been to his ranch in Nebraska, and his hotel in Wyoming. All we have left is his gravesite in Denver Colorado and we will have hit all of his main haunts.

The museum was very good and was only $5 each. It had a great Buffalo Bill Cody section, but many other things as well. Did you know the inventor of the black box (used in airplanes) was from Le Claire? Now you know.

There was a slice of the “The Green Tree”, the largest Rock Elm on record at 225 years old and a famous landmark along the river. It was cut down in 1964 and another tree planted at the same spot. 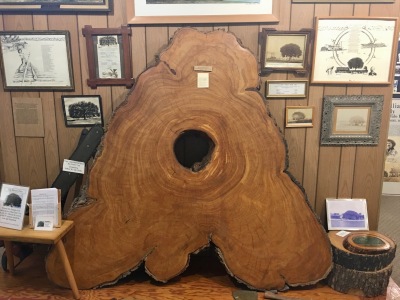 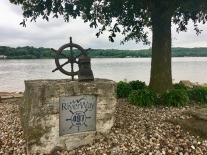 There were war artifacts from the civil war to WWII. And of course, much information about the River Boats and their Captains.

There were a lot of river boat models and they even had a complete river boat on display, the Lone Star, that worked on the river until 1964.

We had lunch at the Blue Iguana on a patio overlooking the river. When we asked our waitress what there was to do in the area, she told us that just down the street was Antique Archaeology.  That is the original storefront for the guys from the show American Pickers which  we used to watch. So of course we walked over.

It was cool to see but I was surprised that it looks like they make more money from the sale of their brand and not the re-selling of their picks. There was a crowd of people the whole time we were there and it looked like a tour bus stop as well. We would have never known if our waitress would not have mentioned it. So now we know what Le Claire is really famous for! And just a couple more pictures:

So, pretty two good stays at two Harvest Hosts. Now back into Illinois and on to Indiana.