Our next two stops were at very nice campgrounds not far from Lake Michigan. They were both Passport America places – which means we stayed at half price because we have a Passport America Membership. It also means we were limited (in these cases) to two days each. I’m really feeling a need to stay in place a bit longer each time, yet we’re on a timeline. To get somewhere. Sort of.

At the end of last month we signed up for a new job/income opportunity/business. I’ll explain it further at a later date. But for now, we signed up with this company and are waiting to get training and to know where we’ll need to be to get started. Until then, we are in somewhat of a limbo. All we know for sure at this point is we are going around Lake Michigan (East to West) and will loop around to be in Arkansas by September. As much as I don’t like planning, I like this unknown stuff even less. Ironic, isn’t it?

Our first stay in Michigan was kind of a dud. It was a beautiful spot with a view of a bay, but we hardly got out at all. Tom spent hours on the phone fighting with AT&T and I had a lot of my dad’s banking business to deal with. Not fun stuff. Then it rained. A lot.

So we headed out of Muskegon without even knowing what we might have seen in the area and our moods were not the best. But they brightened with the sun at our next stop near Bear Lake. The campground – Kampvilla – was probably the best we’ve been to. The spots were spacious, and it was super well maintained.

They had activities galore: It would have been a kid’s paradise. There was a playground – that even had toy trucks in the sand, and a game room that had every game imaginable – with all the pieces! They had shuffle board courts and ping pong tables. The paddles and balls were right there, so of course we played a bit.

When we asked the owner (of 23 years) at Kampvilla what there was to do in the area, she recommended the town of Frankfort just up the road. Right on the big lake, it was a charming town. This was our first full view of Lake Michigan.

It’s very interesting to me how these lakeside towns are like the beachside towns near my hometown. Although it was surprising to us how few people there were at the beach.

We walked on the beach and out to the small lighthouse, and I got to put my feet into the great lake.

It was very cold, although we saw a few kids jumping in from the lighthouse jetty. Then we strolled back into town and poked around the shops and marinas. 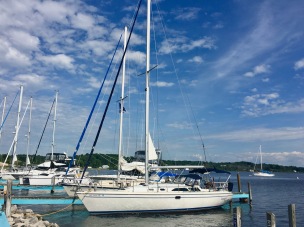 We saw that they were playing a movie I’ve been wanting to see the next night with free popcorn, so we penciled that in as a possibility because we haven’t been to the show in a very long time.

The next day we drove the other direction to the historic town of Manistee.

It was charming, but not much to do if you’re not interested in eating, drinking, or shopping. We went to a beach on the bay and watched the boats come in and out of the river.

Then checked out some boats at the marina before going back to camp.

We took advantage of our nice campsite and played some cards under the shade of a tree. Then we decided to go back into Frankfort for the movie. It was a nice experience in the old theatre, but the movie (Book Club) did not live up to my expectations. At least the popcorn was free!

So we hit the road again to head to the much heralded Sleeping Bear Dunes area. 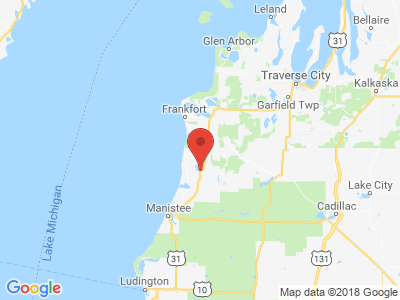