We planned on spending the Labor Day weekend at our job in Sand Springs, Oklahoma, but we finished up our job a little early and were pretty antsy to leave. So I called my Uncle who conveniently lives between last-job and next-job, and invited ourselves over. Turns out my brother and sister-in-law would be visiting there as well, so we headed to Mountainburg, Arkansas for a mini family reunion. I think the population of the town is about 300.

As we headed east from Tulsa, I felt my mood lifting along with the fluffy white clouds in the deep blue sky – and I realized it was nice to be heading out of the polluted air and into some taller, denser woods. Having to drive all the way by myself (because we’re not set up to tow the new Jeep yet) didn’t bother me. I had the stereo cranked on Sirius the whole time.

My uncle assured me there was plenty of room to park at his house, but it’s always anxiety producing to go into the unknown. Our first hurdle was to find the right address. Luckily the street wasn’t busy and Tom was able to “park” the RV in the middle of the road while I went ahead to make sure we didn’t turn into the wrong driveway. There was a Marine Corps flag in the driveway – yep, right address. To confirm, I drove up to the house and found my brother Mark’s car in the carport, and enough room (barely) to turn the RV around once we got in. Our second hurdle was to make the turn into the driveway, and I walked back to the street to guide Tom across the narrow pavement over the drainage ditch. He made the turn and stopped: Third Hurdle – low branches hitting the roof. But at least we were off the road, so we headed up to the house to meet everyone. I had just seen my Uncle Art, but it had been too long since seeing Aunt Daphne, and I only met their daughter, Meredith, once, many years ago. After making re-introductions, Mark and Uncle Art rounded up some pruning equipment, and we proceeded to do quite a bit of tree trimming.

Uncle Art apologized for not realizing how tall the RV was, but it wasn’t necessary – we were just happy to be at such a beautiful spot. Their home (now Meredith’s home) is on a wooded hillside and we were parked right in the trees. It was awesome!

We had a lovely time visiting. I enjoyed being around my “new” cousin and her girls.  Tom and Art and Mark took a male road trip to visit my cousin Robin’s husband in the hospital, while us women folk stayed behind to talk about them. (just kidding, Tom)  Meredith fed us exceptionally well the whole time we were there, just like cousin Robin did when we were with her. Must be a cooking gene I didn’t inherit!

Tom was up at 4:30 every morning to accompany Art on his coffee-with-the-boys routine. Tom enjoyed listening to the locals, to whom my uncle – who has lived there over forty years – is still a newcomer. When Tom told them we were heading to Eureka Springs (our next job), they claimed it was full of “hippie pot smokers and gays”.

Those are probably two “facts’  that would not have shown up in research – if I had done any research. But because we were headed to Eureka Springs for work, we didn’t really check out things to do in the area first, as we normally would have.

It was a little hard to say goodbye to all the fam (and food), but the drive to Eureka Springs was lovely – and lonely as I was still driving separately. After we got checked in to our new home for the next two weeks, we took a drive to explore the town.

Along the main highway through town is hotel after hotel with restaurants in between. Definitely a tourist town, which is what my aunt and cousin had said when they described the downtown that was “like a little Switzerland”, but we weren’t expecting all of the Victorian houses. 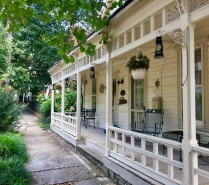 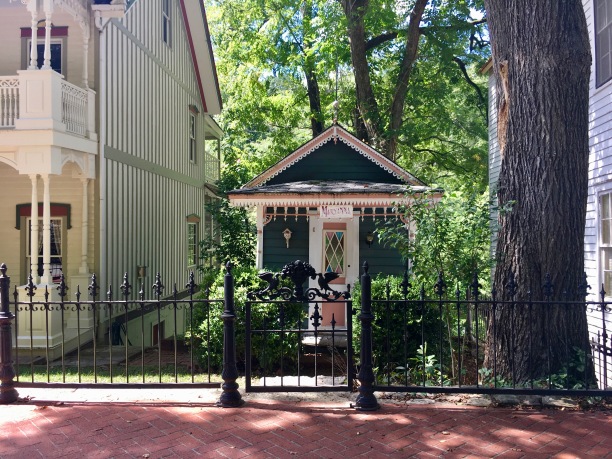 What a surprise! It reminded us of a gold-induced boomtown. It didn’t take us long to learn that this was a boomtown in the late 1800’s. It grew from around 500 to over 10,000 in just one year once word of the healing waters of the springs got out. We found several of the springs on our initial drive up and down steep and very narrow streets. Grotto Springs was inside a cave and the landscaping was beautiful. 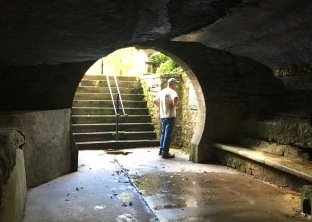 We stopped and explored each one, but they had all been capped off.

We later learned they were closed because of water quality, and all the water you drink in town is city water. Some were like small pools, and some were quite natural. Below are Crescent Springs, Laundry Springs, and Little Eureka Springs. 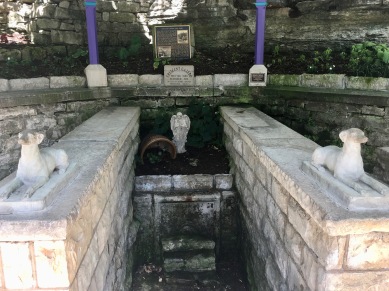 We also later learned that they now fluoridate the water in Eureka Springs, much to the dismay of the 2,000 plus current residents. First strike against Arkansas.

Then we found the downtown and it was adorable. Reminded me of San Francisco because of the triangle building and the way it was so hilly. We stopped to stroll around the stores a bit, but had to get ready for a long work week coming up.

We may be here to work, but I think I’m going to love staying here for two complete weeks. I think that would be our longest stay in one spot since starting our journey.

In fact, I think the Ozarks has been my favorite area to date!

2 thoughts on “From Okie to Arkie”