While staying at Blue Mesa Reservoir near Gunnison we took a lot of Jeep trips. On our third day there we drove into Lake City on the opposite side of the water. It was a long drive through the middle of nowhere. Lake City is the only town in the county of Hinsdale and is touted as the most remote county in the lower 48 and one of the most roadless.  The town was quaint and obviously a hot spot for OHV’s. 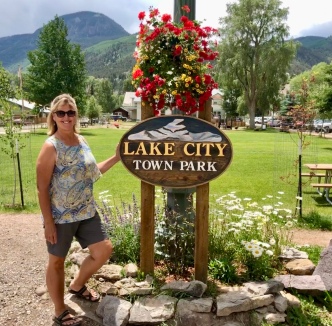 After spending some time at the visitors center there, we decided to drive the Alpine Loop – a backcountry byway from Lake City to Silverton. Silverton is the high elevation city we drove to from Durango on the other side. (see that blog here). We decided we wouldn’t go all the way – that would be like a full day trip and we were getting a late start. But we would at least go as far as we could in the Jeep. They told us some of the loop was reserved for “experienced 4-wheel drivers only”. Tom’s experienced, but the Cherokee can only get us so far on off-road trails.

Even thought it was raining, the drive was gorgeous. Along a bulging and roaring river, past old mining camps and through Aspen and pine forests. We stopped briefly at the old settlements (so Tom could pick out his cabin). 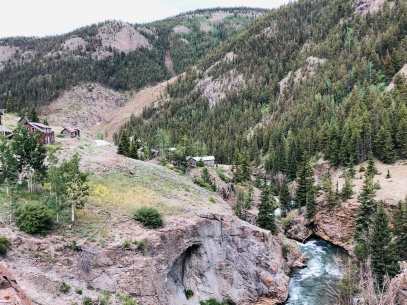 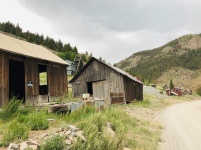 This old dam had a huge hole in it: 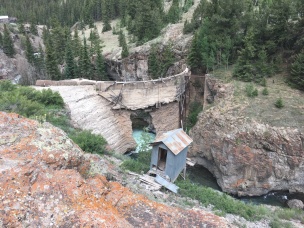 The further we went, the more narrow and rocky the road became. We passed another Jeep couple on a narrow spot in the road that made us stop. They stopped too, so Tom asked them about the trail to the pass and the guy thought our Trailhawk could do it “no problem” – if we “wanted an adventure”. So we forged ahead thinking that at any point we could return the way we came.

Taking the loop from Lake City in a counter-clockwise direction meant that the passenger side was mostly on the outside of the mountains. While I admit I was fairly nervous on the cliff side going up, the views were absolutely breathtaking. 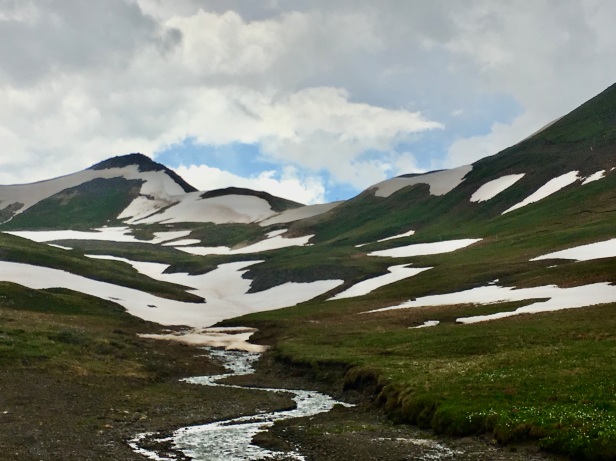 Up past the tree line, we were in Alpine Tundra land and it was amazing. FYI: Tundra is found only in the Arctic and in isolated areas in high mountain ranges, with a very short growing season in shallow soils and harsh weather. Yup, that’s here:

There were 14ers (what the locals call mountains over 14,000 feet) all around us. We didn’t start out the day planning on doing this, so we weren’t exactly dressed appropriately! We made it to Engineer Pass – elevation 12,800. 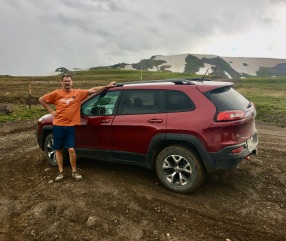 I was grateful Tom is such an experienced off-roader though, because it was rocky and muddy and steep. I began shooting video partly to capture the rare view and partly to keep myself occupied (and therefore less worried). Confession: normally I’m not a scaredy cat, but I was on this part of the trip:

We started our decent and cursed the map we were given as it did not explain the trail well at all. I think the road to the right of the red arrow goes to Silverton – or Ouray.

At the top I could see a trail of vehicles down in the valley, but Tom didn’t want to drive all the way down and back up. So we tried turning at one road which was blocked with snow.

So we headed down the only road we could. It was encouraging that we saw other vehicles on the road – I’m just glad they were going the same direction! 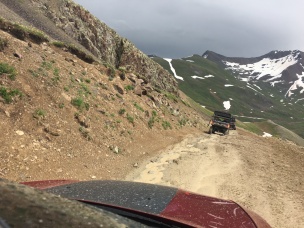 So down we went. At least the rain had let up and the sun was poking out!

We had a nice break from driving and walked around the buildings. Tom picked out his favorite: 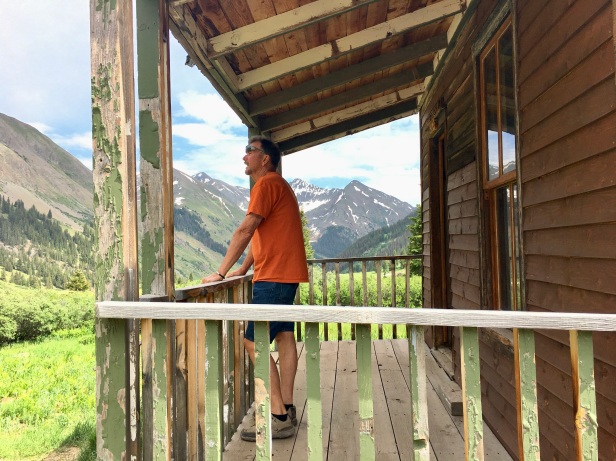 I liked the big one with the bay window – quite a thing in its day and the nicest home in town. Walking through the old house and looking out the windows, I tried to imagine the fortitude it would take to live here. 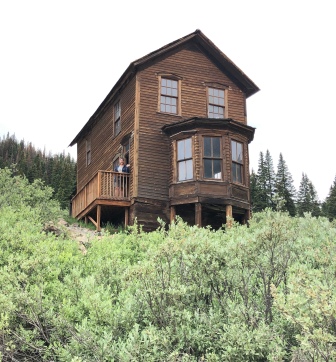 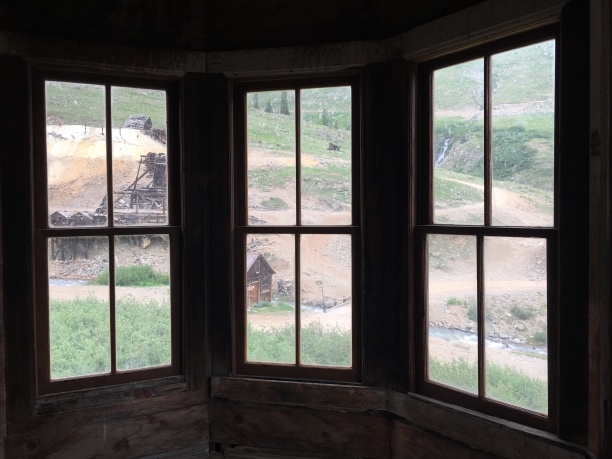 Tom talked with a few of the guys there while I visited the much appreciated restrooms at the site. Apparently the pass going the other way had only opened a week or two ago, but they assured us it was doable. I was glad we didn’t have to turn around and go back over the Engineer Pass, but could continue the loop.

This part of the loop took us over Cinnamon Pass – elevation of 12,640. 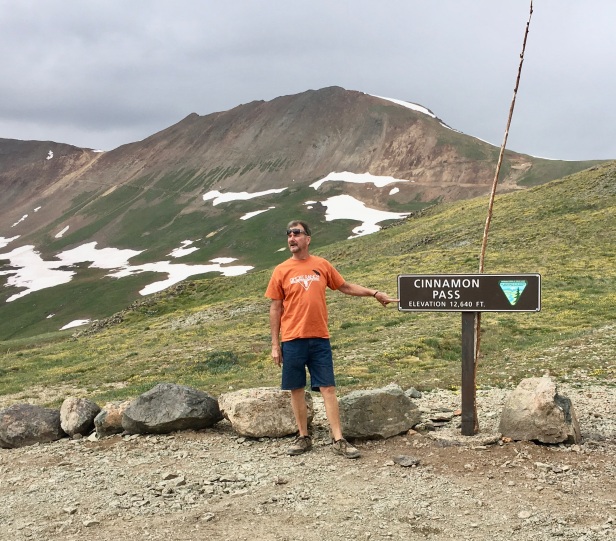 We passed a lot of patches of pink snow and I couldn’t imagine what caused it.

I found out it’s a form of algae called Watermelon Snow.

The views were amazing, but I was saddened to see so many dead pine trees. I thought the beetles killing trees was just in California. But I found out differently.

It was also amazing and saddening to see the tremendous destruction caused by winter avalanches. Whole mountainsides of trees were mowed down. Some were snapped in half and some torn out by the roots.

I was still mostly on the outside of the mountain on this side, but it wasn’t scary – just narrow and winding and wet.

We saw a bit of wildlife – a coupe of deer on the way up, several marmots up high, and even some elk as we got lower. 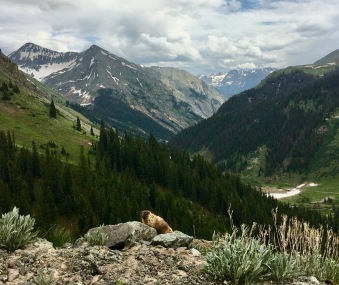 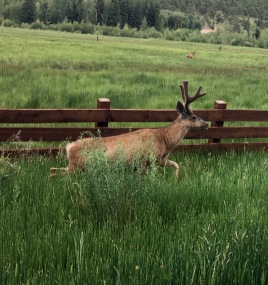 We came back down to civilization and Lake San Cristobal. 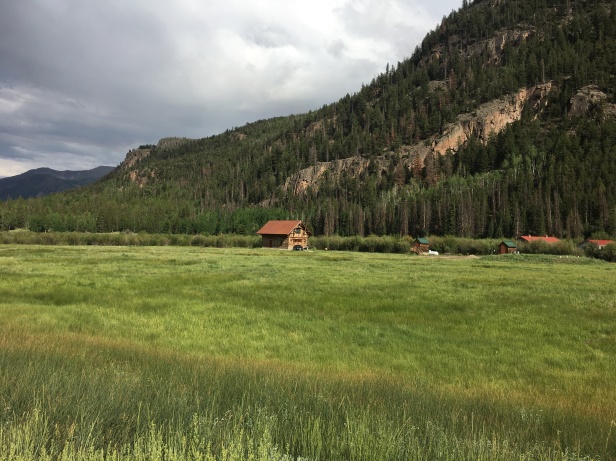 Then it was back through Lake City and on the long drive home. A full day.

The day was simply amazing. I don’t have the words or the skill to describe it, but I hope Tom will make a video of the drive (if so, I will post a link here). I know a picture is worth a thousand words but these just don’t do it justice.

One thought on “Rocky Mountain High”