Okay, now what? That’s what we keep asking each other now that the house sold suddenly!

When I told my daughter, she replied with “There’s no going back now.” True.

Tom & I are still in a somewhat state of shock. Of course we were hoping for a quick sale, but also preparing for what could be a long process. I’ve been working like crazy detailing the house room by room, inch by inch. Tom’s been handling repairs and sprucing up along with the daunting task of emptying the garage. We’ve been busy! Finally it was time to pull the trigger and Tom told our realtor we’d be ready to list on Monday. That gave us one last weekend to finish up. Sunday I was making breakfast and getting mentally prepared for a long day of cleaning and packing when Tom checked his Facebook and local Buy, Sell, Trade page. He saw someone he knew asking if  anyone knew of anyone selling a house. And the rest is soon to be history!

It was even crazier than that though. They were a young couple looking for a house in the country. Tom told him they should come by here anyway. The guy told Tom they had just put an offer in on a country home. Tom said it wouldn’t hurt for them to come by and look.

I was going about my business not really thinking they would be by. Then Tom got a text saying they would be by in twenty minutes. WHAT?! So I jumped into high gear and was still wiping down the bathroom when they arrived, so Tom took them out back first. 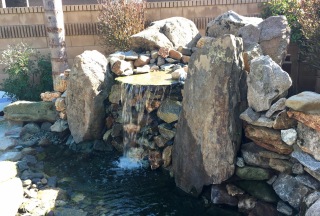 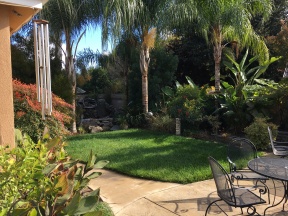 When I walked out back the kids were climbing all over the waterfall and saying “I love this place!” And “Can we get this house pleeeze?” I talked with the young woman about how I always wanted to raise my kids in the country, and yet how nice it’s been living in town and how our kids played in the street with the neighborhood kids. I showed her all the things I loved about the kitchen and laundry and closets. Still, I was expecting them to leave to reconsider their plans etc.

Next thing I knew, the young man (M.W. who Tom has known since he was a toddler) said this is the amount they were approved for and Tom said that matched the amount he was expecting and M.W. said he’d see if he could get out of the offer they just placed and Tom said he’d call our realtor and cancel the photo shoot scheduled for Monday morning. WHAT?! They left and Tom and I just looked at each other. “Did we just sell our house?” he asked. I shrugged.

We didn’t know what to do with ourselves. Did this mean we didn’t need to take the RZR to storage today? No final window washing and floor mopping? After standing around for a while trying to sort it out in our minds, I suggested we drive up to Fresno as a distraction. Tom was going up anyway to get oil for the RZR to change it while he still had a garage to work in. So off we went.

When we got back M.W. came by and told us that their offer never got submitted because the owners were out of town. (oh how I love serendipity!) And he let that realtor know to take it off the table. He asked us what length of escrow we wanted and talked about drawing up paperwork. WHAT?! When he left Tom said “I think we just sold our house!”

Again, we didn’t know what to do with ourselves. Was this really happening? It felt so surreal, and it’s not like we were jumping up and down because it was just a handshake. Let’s see if this actually makes it into escrow, we told each other. So we left the house again to go meet his daughter at a bar and have a beer. Let it sink in a little. On the way home, Tom called our realtor and broke the news. “Good for you, bad for me,” she said. (She’s wonderful and we’ve worked with her many times before, so we will definitely make it up with her.)

On Tuesday M.W. brought by the paperwork for our signatures and we opened escrow. So yes, we’ve sold the house, and while it could still go South, it looks like a solid deal.

And we still don’t know what to do with ourselves! Yes, there is PLENTY to be done, but it’s not like we can start selling furniture. What if something happens and we have to re-list? But there is SO much to do, and so little time, that I still feel a lack of focus. Okay, now what?

Last night we went to our friends house for dinner. That was a lovely distraction. Tom is feeling especially discombooberated because this is his very last week of work. “I’ve been working since I was fourteen. I’ve never been without income.” he told our friends. So there’s his official retirement to think of. He’s been in the truss business for 40 years (“an icon in his industry” per his current boss) and we don’t even have time for a proper send off. Our friends asked if we were going to have a farewell party. “There’s no time!” Tom said. We already had this month booked.

We’re doing a vendor faire up north and then going to Tuscon for the Escapade. At the time we booked those things it looked like good timing. But  now that takes two weeks out of our moving time.

And things just keep coming up: the AC/heater on the Jeep stopped working yesterday. Tom took the RV in for service today only to be told they no longer work on Cummings (would have been nice for them to tell him when he scheduled the appointment). My laptop seems to have died this morning. And I was hoping to get in for one last appointment with my hairdresser, but I don’t think I can get in this soon.

So yes. It’s freak out time.

2 thoughts on “Freak Out Time”