A + 49 (days since we started our Adventure)

Jenna just got married and I think he is still reeling from the shock of giving her away!

I felt this same sadness as we were saying goodbye to the grandson a few days ago, knowing we won’t see him again for over a month. 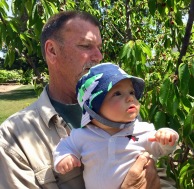 And there was a little trepidation after I called my dad shortly after hitting the road, only to find out he was just diagnosed with walking pneumonia.

Not our most enthusiastic departure. Possibly because we’ve spent the last two weeks hanging out around our (ex) hometown and visiting so much with friends and family.

Our first week after dropping off college daughter at her mom’s house was spent about 40 minutes away from there at a campground at Lake Kaweah.

While camped there, Tom did quite a bit of fishing (caught one! but too small and had to release), and the weather dropped about thirty degrees while we were there. Shorts one day and coats the next! Also, since we were so close, we attended Gaia Fest 2017 (as vendors) and were able to visit with our old peeps from the store (Cosmic Corral). After that we met some dear friends from Kingsburg for dinner. That was so fun that we stayed an extra night at Kaweah Lake so they could come up and cook hot dogs and s’mores around the campfire.

Another surprise while camped there: We ran into Tom and Caitlyn Morton of mortonsonthemove.com. We had met them in Quartzsite at the Xscapers Convergence this year and were very excited when we saw their rig at the same campsite. So we had a nice little visit with them too before they headed off to Yosemite.

We left that waterfront campsite to go up to Oakdale to see my daughter and her family (i.e. grandson!). We were a day early so we camped at a lake (Woodward Reservoir) just fifteen minutes from her house. 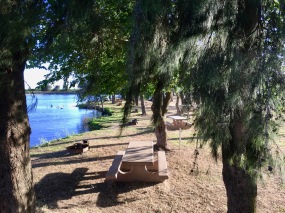 We had the place to ourselves!

There were families of geese EVERYwhere

We had such a nice spot right on the water (again!) that we decided to stay there and commute rather than squeeze in their driveway again. We had an awesome three days of visiting and babysitting and picking cherries! 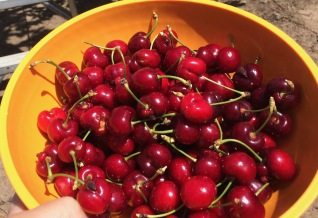 The kids even came out to our campsite for a BBQ one night. It was hard to leave.

But we had to get back to Kingsburg so we could help with the wedding set up on Friday.

By this time the weather had turned warm again and we were looking to one-hundred degree days by Sunday. So we definitely wanted hookups to run the AC! So we stayed at Riverland RV Park, just minutes from our old home and the wedding venue.

Saturday was a tearful day for Tom, but he never showed it as he walked his eldest daughter down the isle and did his father-daughter dance. 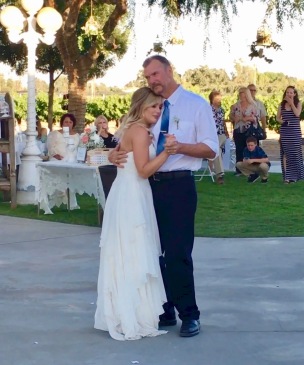 The wedding was beautiful, and the icing on the cake (for me) was that ALL of our children and grandchildren were there and we even got a photo to prove it!

In fact, we got a lot of wonderful family photos. Here are a few I couldn’t resist adding! 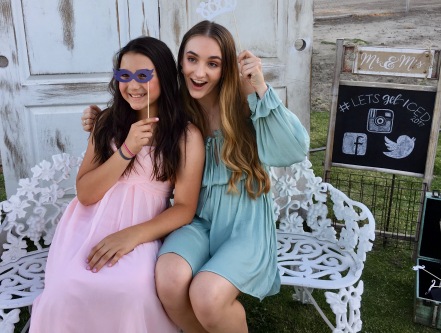 Fun at the photo booth.

Casen with his mom & dad

My son and his fiancé

All the McGuires there

Again, it was hard to say goodnight to all of them knowing we’d be leaving town again.

We ended up spending four nights at that RV park by the river. We were now three for three with waterfront locations – quite nice after so much time in the desert southwest!

Sunday morning was spent with wedding cleanup, and Sunday afternoon we sat in air conditioning while plotting our course for the next month and a half.

Tonight we are camped at Bear River Campground – parked just a few steps from the river. We are now four for four! 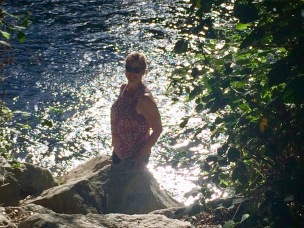 camping at Bear River near Auburn

camping at bear lake near Auburn

How lucky are we to have a home where we can enjoy variations of nature in such close proximity! It’s pretty nice consolation for leaving “home” again!

I’m sure the time will fly by until we see the families again!