When planning our route south back to the central valley, we planned on crossing over around Santa Rosa. Until we heard about the fires and road closures.

Eventually, we decided to cross at Highway 299 – which friends from Crab-A-Rang had told us was closed, but now was open. It looked pretty curvy on the map, but turned out to be just fine. There were several delays when road work took it down to one lane, but when you’re in a motorhome that just gives you a chance to stretch your legs.

The drive was beautiful – until we hit the area that had burned. Just along the highway there were so many remnants of burned down homes and businesses. The road crews were still busy cleaning out the burned wood although I don’t know how long it had been since the burn. 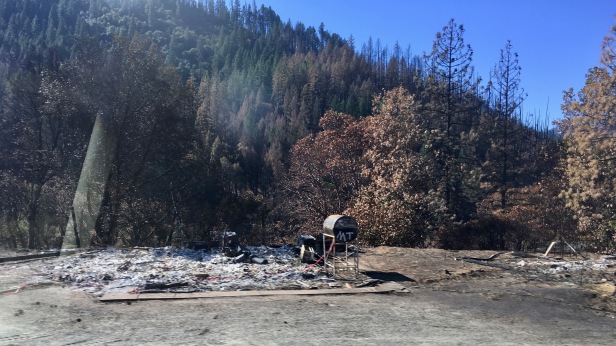 But the devastation, while spotty, was severe. A whole town turned to ash. And then there’s the fires still burning with tragic results further south. I can’t even wrap my head around the figures or the pictures on the news.

While we normally don’t watch TV news any longer, I was enthralled with the coverage of all the fires in the northwest and before that, the hurricanes in the southeast. So much destruction by Mother Nature in such a short time span and broad area.

Random things crossed my mind, like – how will they ever find a land fill large enough to take in all the debris? Will lumber prices go up? Will they stop shipping trees overseas? (Maybe it’s because we had just been in the forested Pacific Northwest.)

But then, enough became enough and I could no longer watch the sadness.

My heart goes out to all those whose lives have been changed so abruptly. It’s hard not to get into a depressed state about the devastation and lost lives.

My favorite source of solace in bad times is the Serenity Prayer:

According to the Oxford Dictionary, serenity means “The state of being calm, peaceful, and untroubled.”

While I don’t want to negate the tragedies of others, I do want to make sure I don’t make matters worse by adding to the drama or feelings of hopelessness.

And I want to maintain my attitude of gratitude. I sincerely realize how lucky I am and I am so very grateful for so many things.

Number one on the list is the safety and security of my family and friends. Number two is our new lifestyle. Having mobility means we can (pretty much) choose where we live and when.

When we decided to make the change, we were concerned about hitting bad weather. And it could still happen. But I like to think that if we ever did get evacuated, we’d already have all our worldly possessions with us. These are things I can’t help thinking about when I watched the news coverage. I guess owning less means we have less (things) to lose.

So I’ll turn off the TV, count my blessings instead of sheep, and sleep well knowing that a higher power is in control and tomorrow is always a new day.

2 thoughts on “Fires and Floods”