The Big Easy, Crescent City, NOLA, Birthplace of Jazz, Paris of the South – there are many nicknames for New Orleans. I’ve heard everyone should experience Mardi Gras there at some time in their lives, but we figured Saint Patrick’s Day on a Saturday was the next best thing.

I was a little apprehensive about our going there: no budget friendly RV parking, city congestion, unknown territory. I was also excited or course, and lucky for us, Tom did a lot of research on how to get around. We stayed at Bayou Signette State Park, which I highly recommend. It was right off the highway, but felt like we were in the country, and it was only about a half hour drive into the city.

We stayed at that park for four nights, but only went into the downtown area twice. Two full days was plenty for us. The first day we were getting our bearings, and checking stuff off the list. 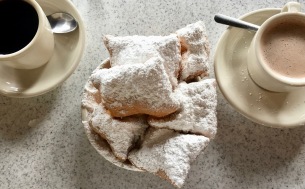 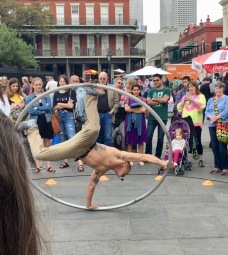 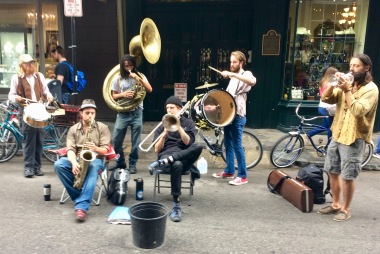 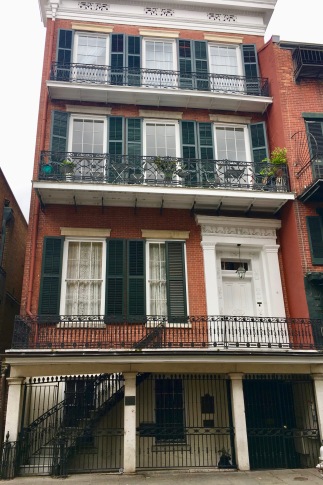 Architecture in the Garden District, check. Tour a cemetery, check. (no pics)

Beads tossed down from a balcony on Bourbon Street, check. Drinking a Hand grenade, check. In fact, there were drinks served in all types of containers – even fish bowls! 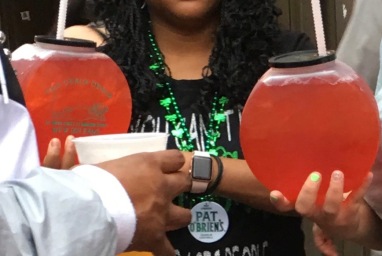 The second day we got an early start to be able to get transportation to the big St. Patrick’s Day parade in the Garden District. It was a a long wait, but the parade was so much more than I could have imagined. The crowds lining up were great – everyone dressed in their best green (including us). 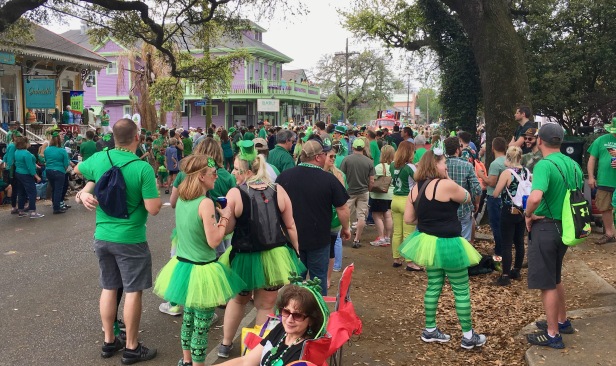 Shops were closed along the route, but everywhere there were booths set up selling green beer and other beverages. So of course Tom participated. 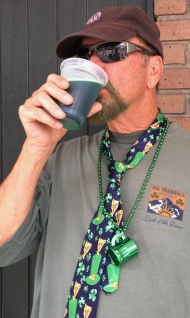 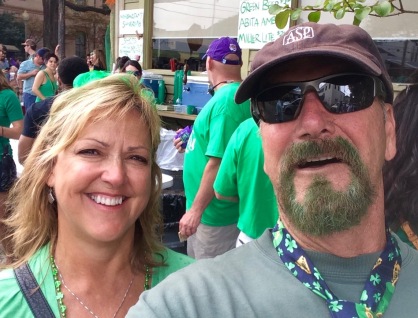 The parade started with dignitaries on cars tossing out beads every so often. Then there were car groups, and horse-drawn carriages.

Then there were LARGE groups of Irish Guilds and men (only) wearing matching suits with kelts carrying umbrella poles with flowers.

Apparently the tradition is they give out flowers for a kiss on the cheek – so of course I participated. 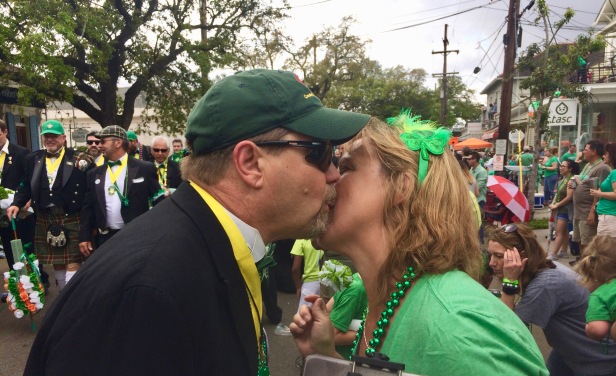 As the parade was moving one direction, we were walking in the other, towards the beginning of the route, and then we came upon the motherlode. There were tractors pulling double decker floats with people lined up on both sides tossing off massive quantities of stuff.  It was crazy. There were families set up in the grassy median with pop ups and ice chests and large bags and baskets to put all their booty in.

Here is just a sampling of the things being thrown overboard (in addition to endless amounts of beads):

There were so many beads being thrown that if you missed catching them, you didn’t even bother to bend down and pick them up, so there were strands of beads (and trash) on the ground everywhere. In fact, I only saw one or two people pick them up from the ground so we were wondering if that was a bad juju thing or something.

After the parade we went back into the French Quarter for dinner – and ordered a sampling of Gumbo, Jambalaya, and Crawfish Étouffée. All delicious. We ate at the bar instead of waiting for a table and the bartenders were adorable – Ya-ya and Mary – and they addressed everyone as “my love” as in, “What can I get for you, mi’luv?”

Walking back along Bourbon Street, the crowds were not as rowdy (or as green) as I expected, but it may be because we left shortly after dark.

We had a great (and exhausting) two days of The Big Easy. We agree that it’s a city everyone should experience. The downtown, and especially the French Quarter, was so much bigger than we imagined. In fact, Tom kept saying “This is nothing like I imagined.”

There were so many other things in the area that we didn’t experience – like the WWII Museum, the French Market, the Riverboat cruise, and guided tours. We did some other exploring of the area around the State Park, but that will be the next blog.