Leaving Leelanau Peninsula was sad because we enjoyed that area so much. Really awesome quaint (and very safe feeling) small towns. But head north we must. Still looking for that cooler weather. Who knew Northern Michigan would be so hot in the summer? Obviously, not me. Although according to reports, it’s been hotter than normal. Which seems to be the case where ever we head this summer.

When my daughter asked how we liked it in “the mitten” I had no idea what she was talking about, although shortly after I heard a newscaster refer to the area (northern Michigan) as “the tip of the mitt”. I’m still left wondering if the upper peninsula is not part of the mitten at all. If you know perhaps you could tell me!

Not finding an affordable place to stay in the northern tip area, we stopped a bit short and stayed at a casino in Petoskey, a really pretty lakeside town.

We enjoyed walking around the downtown and over to the marina and lighthouse at the mouth of yet another bay. Beautiful views and amazing old houses were everywhere. 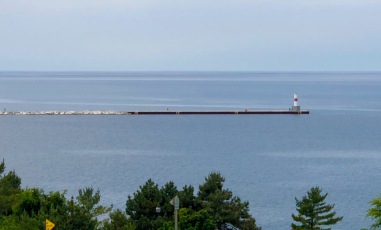 The second day here we took a scenic drive around the bay and out by Lake Michigan. The greens of the forests and the blues of the lake were amazing.

We decided to go to Mackinaw City and visit Mackinac Island on the third day while we were still on the south side of the famed Mackinac bridge. Yes, I spelled those correctly, and yes they are different, although all three are pronounced the same – with the AW at the end. I still haven’t figured out why!

Mackinac Island was at the top of everyone’s must see list and it was (a must see). There are no cars at all on the island, and you can only access it by ferry (or small plane).

The ferry ride over was fun, and when you got off the boat you saw bikes and horses everywhere. 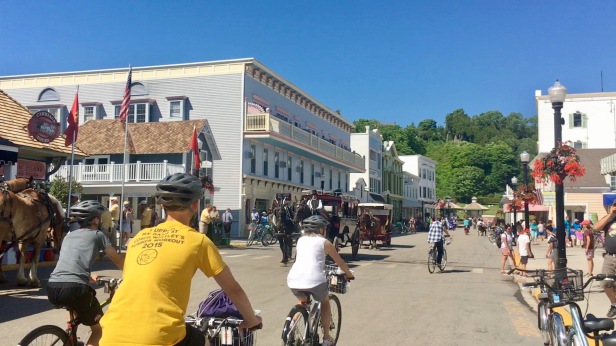 Even the supplies brought over by boat are hauled inland by horse drawn wagons.

There must have been a bike rental place on every block, and at least twice as many fudge shops!. We decided this would be another great place to rent bikes, as we could easily ride the eight miles around the mostly flat perimeter of the island. Venturing up and over through the middle of the island did not appeal to me, although we saw many people who did.

Mackinac Island is actually in Lake Huron, as the two great lakes merge under the infamous “Mighty Mac” Bridge  over the Mackinac Straights. The waters were crystal clear and so very blue.

As there is nothing but bikes and horses on the roads, it was easy to make many stops around the island. 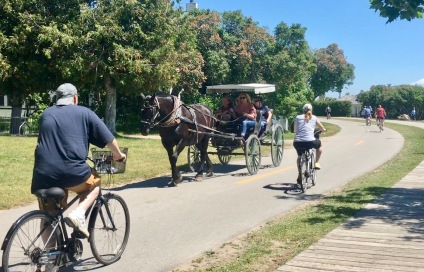 One stop we made was to hike up the 207 step Spring Trail  to Arch Rock  where we took in some amazing views of Lake Huron. 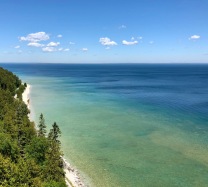 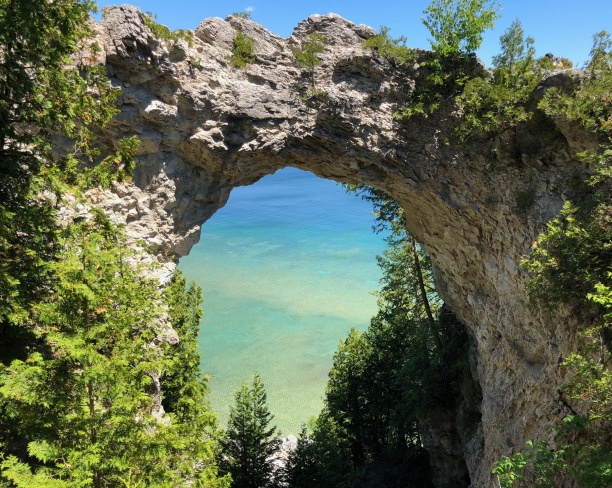 It might have been nice to do some hiking on this island, had it not been so hot. But I was happy touring on my beach cruiser. A lot of people opted for the horses to get to the top. 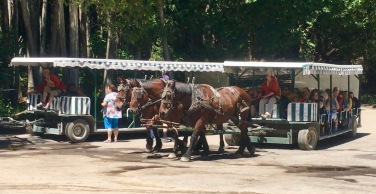 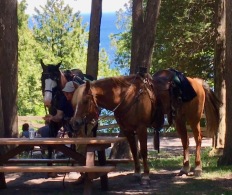 After we turned in the bikes we took the walk up to the Grand Hotel, the most lavish of many fancy hotels on the island. They even had a dress code, which kept me (in my shorts) from touring the hotel lobby. That and the fact it costs $10 to walk around the grounds.

The homes and buildings on the island were large and charming. 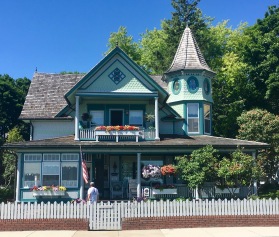 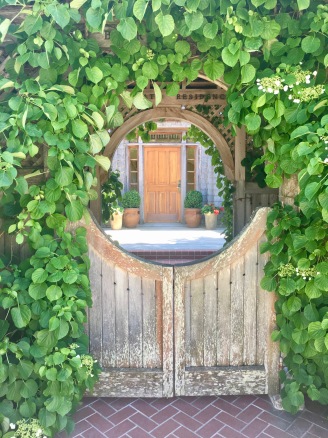 We spent the whole day enjoying the island and it was quite enjoyably cool as we headed back across the water on the return ferry. We drove through the town of Mackinaw before returning home and saw a lighthouse and a hot dog stand. 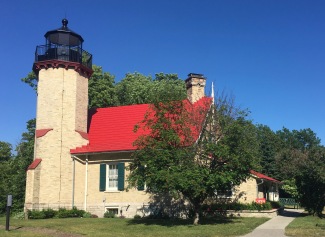 Tomorrow we will be back up this way with the motorhome to drive it across the legendary Mackinac Bridge into the UP (Upper Peninsula). 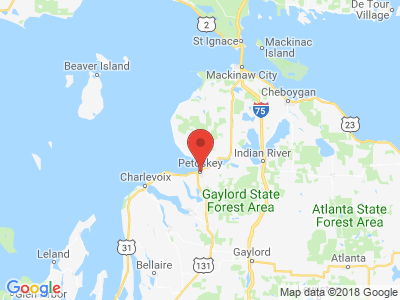 One thought on “Tip of the Mitt”