It was time to do it – head across the dreaded Mackinac Bridge,  over the Mackinac Straights – which is where the waters from Lake Michigan and Lake Huron merge. It’s a five mile long suspension bridge that reminded me at a distance of the Golden Gate in San Francisco.

Pretty much ever since we started our way up Michigan and told people we were going around the top of Lake Michigan and east to Wisconsin, people got excited talking about going over “the bridge”. We talked to many residents who flat refuse to cross it. We heard many stories of it being closed due to high winds (causing sway) and of people who chose to wait out weather at RV parks or parking lots. We talked to tough looking biker-dudes that said they would never ride their motorcycles across.  And RVer’s who said they’ been across it in their cars, but would never drive an RV across.

After we crossed it, I really don’t know what the big deal was. I have to say, “What’s up with all the scardy-cats?” Granted, we crossed in perfect weather, but. . . it’s just a bridge. I’m surprised it’s instilled so much fear in so many. As Tom would say, “Don’t be scared.”

We went all the way straight north of the bridge to Sault Sainte Marie – pronounced Soo or Sue, not Salt! “Sault” is a French word for rapids. The town is right across the St.Mary’s River from Canada – which has a Sault Sainte Marie also. We thought about visiting the Canadian version, but didn’t wan’t to wait the hour to get across the short bridge connecting the countries.

Lucky for us, we arrived on the annual “Engineers Day” which means the power plant and the locks were open for people to visit.  First we learned all about how they make power from the height differences in the Lakes. Lake Superior drops twenty-one feet into Lake Huron. The down hill rapids have been replaced with locks, and they were fascinating to see.

At the beautiful brick power plant, they had engineers on hand to dole out info. They were also giving out free waters (it was Hot!) and hot dogs! 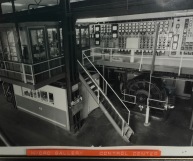 Then we took a shuttle down town to the locks – which incidentally are called the “Soo Locks” (not “Sault” – weird, right?). We got to walk across them when they were closed.

The Soo Locks also has a 3-story viewing platform that’s always open for people to watch the ships getting raised or lowered, but we didn’t have the patience to sit and watch the lengthy process. However, in that same area, they had a nice little museum about shipwrecks and we learned that there was a shipwreck museum at Whitefish Point. So that’s where we headed the next day.

It was a bit of a drive on a blustery day, but I enjoyed the drive along the shores of Lake Superior, which I’d have to call my favorite great lake so far. We stopped at several lake side spots and I was fascinated how some beaches were just sandy and some were just rocky.

On our drive we passed the Point Iroquois Lighthouse, and we were able to take the stairs up for a foggy view of Whitefish Bay. They also had a nice boardwalk there. 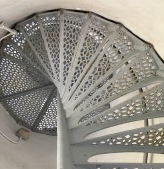 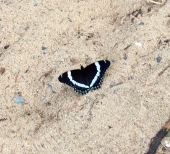 They had more information about the early version of the coast guard too, which was interesting and added to what we had already learned.

We continued on to the museum and lighthouse at Whitefish Point, where there were several buildings housing different displays. 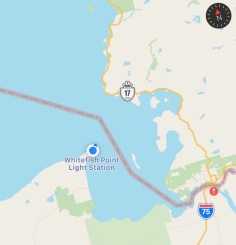 The shipwreck museum was fascinating, and in one building we watched a film on the wreck of the Edmond Fitzgerald (remember the song from the 70’s?). The bell from the ship was recovered and is on display.

The “Graveyard of the Great Lakes” is the 80 mile stretch from Whitefish Point to Pictured Rocks and has over 300 recorded shipwrecks. In addition to weather,  many are due to crashing into other vessels in the heavy traffic of the converging shipping lanes. 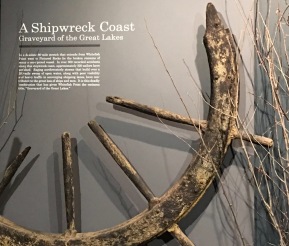 This was a popular visitor’s spot and I wasn’t the only one who was having fun beach combing. The clear water and the colorful rocks were absolutely amazing.

We took the long way home and discovered Tahquamenon (rhymes with phenomenon) Falls State Park. We stopped there and found some beautiful (low) waterfalls around an island.

The only way to get to the island to see the falls up close was by row boat. We didn’t have the kayak with us, so we shelled out the $7 to rent. 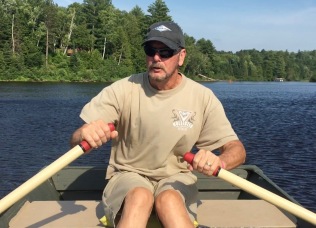 It was a lot of fun. We took the short hike around the island, and Tom thought the falls looked like beer.

The water was brownish and foamed up in the churning water because of minerals. This state park was popular because the day had turned quite warm. Too bad we didn’t take our suits. 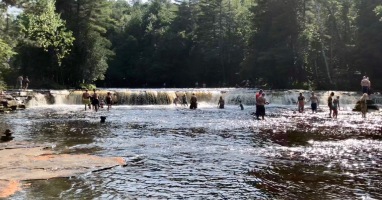 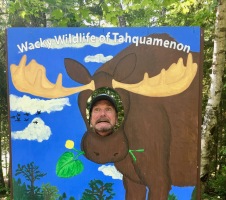 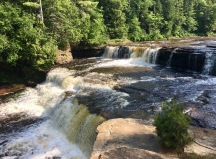 We had a great time. Unfortunately, we’re moving fairly quickly through the U.P. Now we have to figure out where to camp for the Fourth of July. 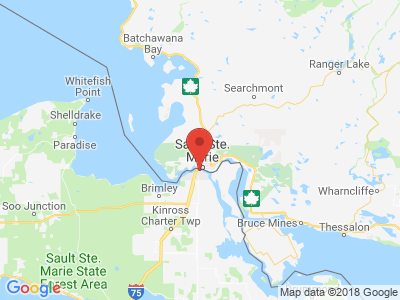