Driving the RV into Baja California was somewhere on our list when we started full-timing, but we had no plans until Pam Santana  called and said they would sign up for the Mexico Convergence if we would so we said “Okay.” And that is how we planned our trip to Mexico.

The Xscapers convergence in San Felipe Baja was quickly sold out, and we were happy Pam got us in. There were 54 rigs signed up and we would caravan down. We were scheduled to all meet up in a mall parking lot in El Centro, California, and then travel across the border the next day. We were all assigned numbers for our lineup and everyone had walkie talkies and we had all been prepped on what documents we’d need, and the process for crossing. It was all easy-peasy.

Plus kind of exciting because we were to have police escorts all through Mexicali and in San Felipe. Arranged because of our very large group. We sailed through that town like rock stars. (Or a funeral procession.)

What hit me most as we drove through that town wasn’t the many American big box stores, or the shanty-towns, but the huge amount of garbage. 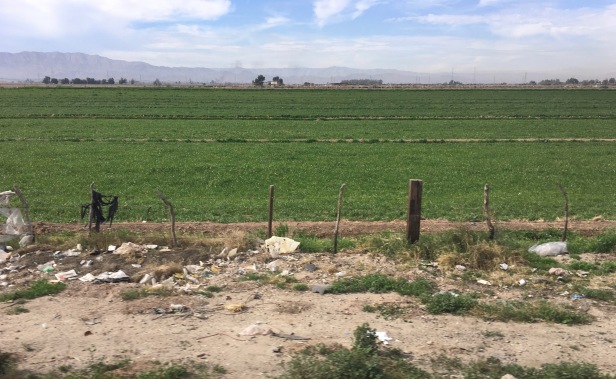 There was trash littered everywhere and it made me sad – and appreciative of our US garbage collection system.

I think Tom and I were expecting a sleepy little fishing town, because San Felipe impressed us with its size. Plenty of RV parks and hotels and grocery stores.

Our group took over an RV park right on the beach and we were 15 minutes walking distance from the town’s main drag, or malecon;  the seawall that fronts the town’s beach area. As soon as we parked I checked out the beach view from our park. We were impressed.

There were activities planned for every night. Our first night after getting all the RVs squeezed in was all you can eat fajitas and Margaritas at a beach front bar just down the beach from us. Live band, good food and drink and great visits. Great start to a great week. 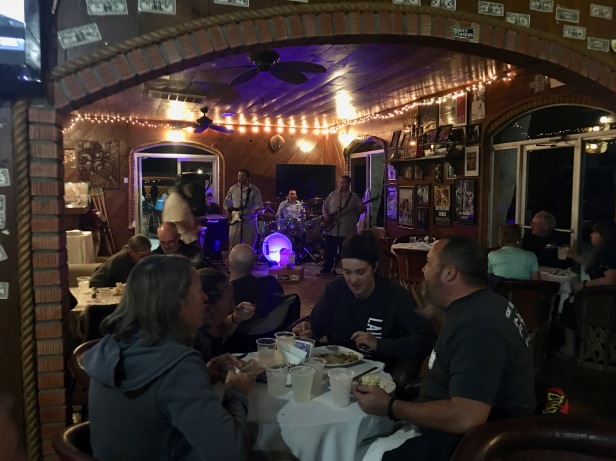 Only two hours south of the border, we were at the north end of the Sea of Cortez (aka the Gulf of California).

The tide went in and out pretty dramatically, but there were only small waves. Great place to take out the kayak, so we did. 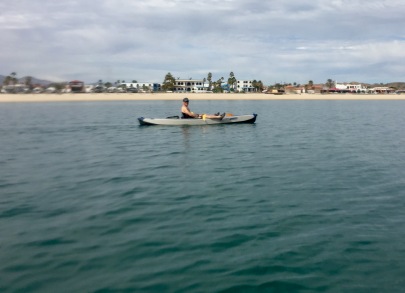 It was pretty chill around camp, with people grouped up for visiting. They even had a truck come in every afternoon that served Pina Coladas in pineapples. There were faux-fire (propane) campfires every evening, but we only attended a couple because it was pretty chilly at night.

But sunny and warm during the day!. One day we drove south as a group to see the giant cactus. As impressive as the giant redwoods. These saguaros were huge. And there was a super-bloom going on that was incredible.

One day Tom and I drove back that direction to Shell Beach and I was in seventh heaven just beach combing and collecting fairy-sized shells.

There were so many buildings and resorts that seemed abandoned and we figured the town was past the prime of its heyday. Although we were there before their official tourist season which starts around Easter. 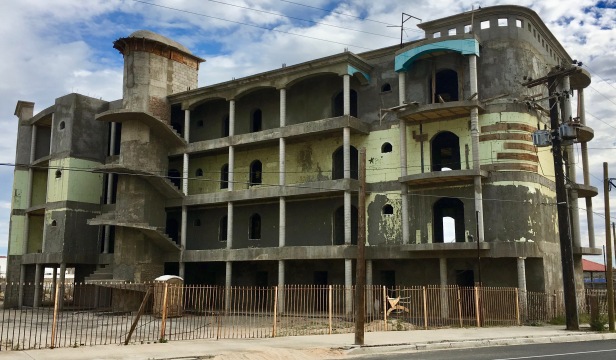 It was so fun being around friends old and new, and the merriment was intense! But it was balanced with a daily meditation on the beach every morning which was awesome. And many people spent the daytime working – me included on a few days.

One day the group did a beach cleanup followed by – you might guess – margaritas at a bar on the malecon. One night a large group went to the Back Street Bar, a back alley bar famous for Harrison Ford’s visit sensationalized by the National Inquirer. There were no shortages of bars in town! 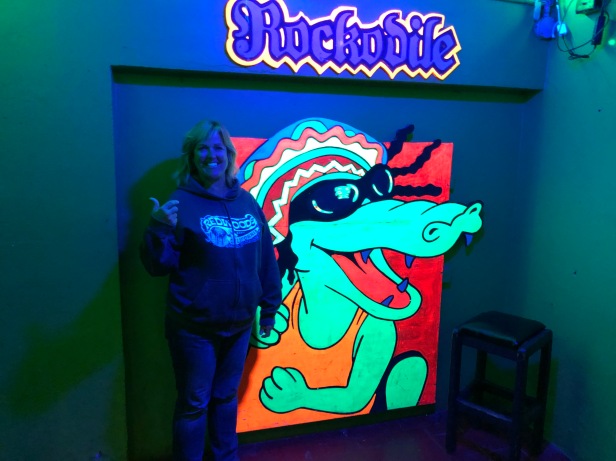 One night was planned at a local brewery and the group was bussed there and back. 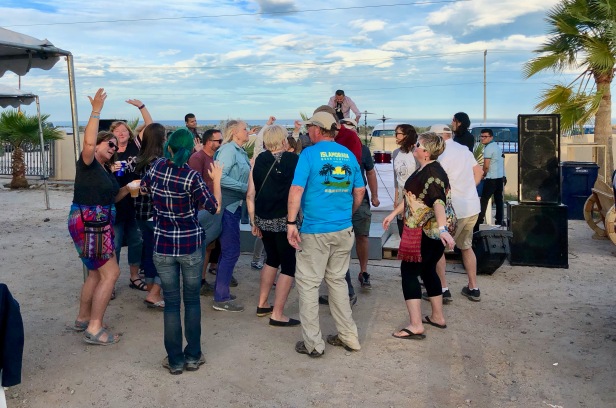 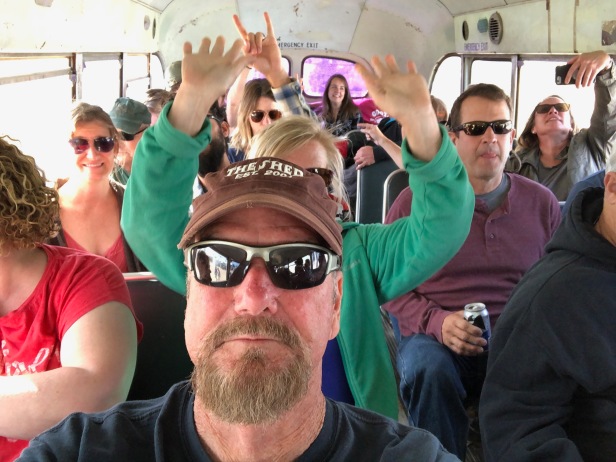 They had a great band and there was much dancing and drinking. And the best ever bar-b-qued jumbo shrimp.

We ate out more than we ate in because – well, because we were in San Felipe! The food was all great and we ate a lot of shrimp while there. 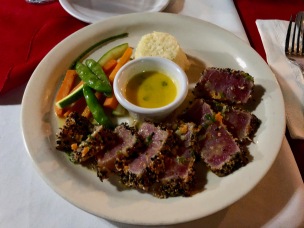 Sometimes we dined in small groups and sometimes we took over a restaurant with a large group. 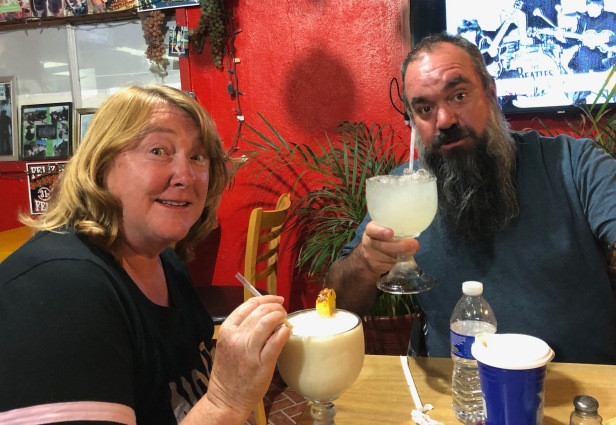 We made some more new travel friends and got to know some that we had met before even better. On our last night there, we all met up in town for street tacos. Our time there flew by.

We know some people have a fear of driving into Mexico, but our experience couldn’t have been better, and we look forward to returning and exploring more of the area.

We got the same police escort back to the border and then everyone went their separate ways.

We will be heading back to Yuma area so we can cross back into Los Algadones, Mexico (by foot) for some dental work. And maybe just one more margarita!