From Phoenix we were going to head back to Tuscon to watch college daughter dance. But we had some time until then, so we stayed between the two cities in Casa Grande. We want to check out the Escapees Co-op (SKP) parks whenever we can, so we decided to check out Rover’s Roost  SKP outside of Casa Grande.

The thing about SKP parks is how welcome they make you feel. This one had a big “Welcome Home” banner out front and the people were so friendly. Which is what Escapees parks are all about: Founder Kate Peterson wanted to make sure that us travelers always had a place to call home. They even gave us a cute little packet:

This park was the original which makes it the oldest. Compared to the other two we’ve stayed at, this one was also the smallest and had the least amenities. But they had purified water, cheap laundry, a workshop where we were allowed to use any of the tools, and they let us receive packages at the park. We took advantage of it all, including their first timer’s special – ten nights for the price of seven.

Not having had hookups for the past three weeks, we figured it was a good place to get some projects done. Our rig was getting overrun with fairies and their supplies, so I needed to find room to store them. We accomplished that by switching our shoe and coat closets which worked really well. Taking advantage of the shop tools and the nearby Home Depot, Tom built us shoe shelves out of wire closet shelving. I tried to photo document it all, but the spaces were just too cramped while Tom was working. It doesn’t look like much difference, but it’s utilizing our space better. 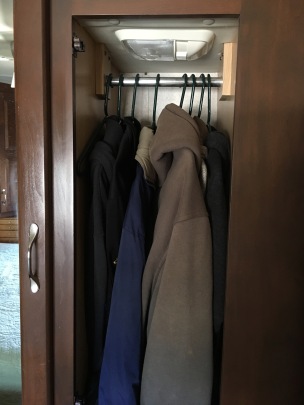 We also moved our tea and spices cupboard into the pantry, so we took advantage of the park having a food drive to clean out our canned goods. The weather was great and we had a productive stay.

We also had fun. We took some walks but didn’t take advantage of the hiking near there – we just ran out of time.

Tom found some sprint car races in the first weekend we were there, so we attended those.

In that same area (Coolidge) they also have the Casa Grande Ruins National Monument which was pretty awesome but kind of odd. We have seen ruins before, but this was a tower that rose out of the flat landscape.

It had been three stories tall, and they have worked to preserve it. It’s very interesting to us that scholars to this day do not have answers to what it was built for and how it was used. 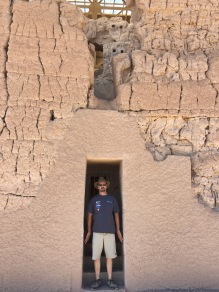 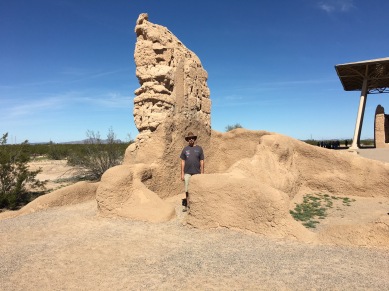 Rover’s Roost is kind of out by itself, so mostly we just chilled and enjoyed the beautiful sunsets.

The park had a daily meet and greet, but no happy hour, and of course the average age was up there. Tom enjoyed a night of Texas Hold’Em, but we skipped out on Bingo night.

We met some new full timers and I wish we had met them sooner – Mark and Kathy were great and I’m sure our paths will cross again.

I got some real (paying) work done, some fairy work done, and even had Tom help me in the shop to carve out a door in this piece of wood I’d been carrying around since Wisconsin.

This door is a work in progress.

I managed to finish making some fairy doors.

Now we’re heading back to Tuscon where I hope to discover some new things to do.