Shen Yun is a traveling dance performance I’ve been wanting to see ever since I first learned about it years ago. When I saw it was coming to the Phoenix area in February, I asked Tom to get us tickets as a birthday present to me (that’s how I justified the splurge!).

I had been planning on us going to Phoenix after the Mexican trip anyway because I wanted to experience the eight-weekend long Arizona Renaissance Festival. We have done Renn Fairs before and it has been on the list of things we might do in the future as we travel. I wanted to see what a large and “permanent” faire was like (where the buildings are permanent year to year).

So that is why we spent a week in Phoenix – staying for free at a casino in Glendale. Tom also took advantage of being in the big city to see a dermatologist. So we were getting a lot of things checked off the list.

Starting with the incredible Chinese dance performance in a downtown theatre. My expectations were pretty high, and the show did not disappoint. The performers were amazing with their precision and athleticism. Thank you Tom, for the treat.

While in the area, we took our college daughter’s friend, Travis, to lunch. He is attending GCU in Phoenix and we figured he could use some food!

Our traveling friends Chuck and Jan have settled in Sun City, which was just a few miles away from where we were staying, so we had a lovely dinner with them. After a hilarious mix up about the dates which had us totally unexpected on their doorstep a day early. We all laughed and rescheduled. This happens with retirees who don’t keep track of days of the week anymore! They are enjoying putting down roots after over a dozen years on the road. They were touting all the benefits of their planned community – it was nice, but we aren’t ready yet!

It was snowing everywhere around Arizona it seemed – even in Tuscon! It was amazing to see the surrounding mountains covered in snow – not a usual sight!

Our day at the Renaissance Festival was a business trip (i.e. write-off), but we thoroughly enjoyed a beautiful day there. We saw fairies and mermaids and even a unicorn:

There were elephants and camels to ride and we even saw mother goose:

We attended some juggling shows and even watched a trained pig:

And of course we attended the jousting tournament: 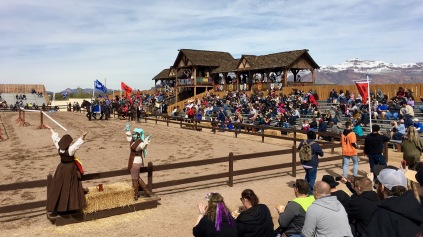 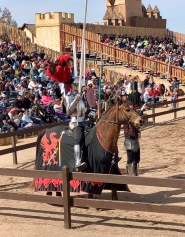 I came away with a bucketful of ideas, but it’s probably not a show we’ll invest our time and money in for the future after all.

Tom can only do so much city life so he found us an area with tons of trails. We drove into the South Mountain Park Preserve above the smogged-in valley for a wonderful hike. 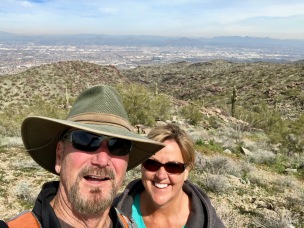 Spring was evident, and everything was green and blooming. 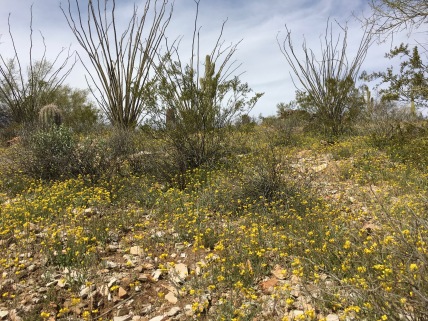 We hiked along a trail popular with trail-bikers. It was amazing to see them fly over the rocks. 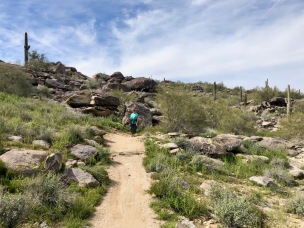 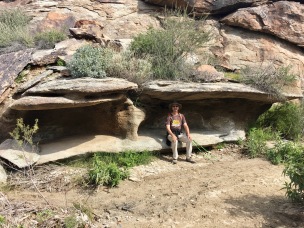 We took some of the trails that went over or through the boulders.

I pushed myself out of my comfort zone to crawl under and squeeze through in some places. Only to find we could have hiked our way around! Thanks Tom!

It was great to get out in nature after spending some rainy days at home playing with clay (making fairy doors).

We are ready to get out of the congestion and traffic of the area, and our next destination is not very far away. We’re heading to an SKP park between Phoenix and Tuscon.

2 thoughts on “Fun in Phoenix”