Our next move getting us closer to Moab was across the state line into Utah.  With the exception of our trip down to Mexico, we have been in Arizona since early January. Which seems kinda weird for us, but shows me that we’re following through with our plan to travel less miles this year.

Our drive north took us through the Hopi Reservation where we have been before and through the Navajo Nation. The drive was amazingly beautiful especially when we got to all of the red-rock monoliths in Monument Valley. Here are some drive-by shots:

Tom picked us a great location at Gooseneck State Park which is on a bluff overlooking  a horseshoe shaped bend in the San Juan River.

Our view from the edge of the campgrounds. 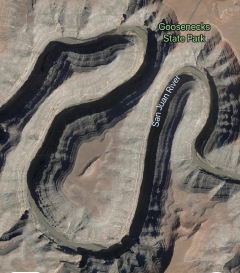 It was really nice because we reunited with our friends Ted and Jan who pulled in right before us.

The next day another Xscaper couple on their way to Moab pulled in, so it was nice to meet up with Don and Erin again as well.

We planned a group outing to the nearby Natural Bridges National Monument. Ted had the only vehicle we could all fit in, so he drove us all in his dually up this steep and windy dirt road.

The monument  was at the top of a plateau and there were several places with overlooks. The views were awesome even though it was a cloudy day.

The bridges were formed by water erosion (which makes them different from arches)    So the best viewing was from the bottom of the canyon.

There is also a hike along the canyon floor, but that will have to be another day.  It goes past all three bridges there and you can go into the “cliff” dwellings that we spied from this overlook: 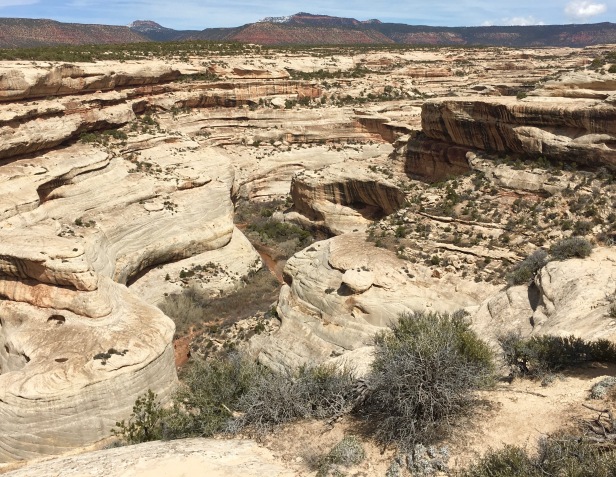 We all hiked down to the third bridge (I didn’t make note of the names) and had fun waling around and posing for pictures. 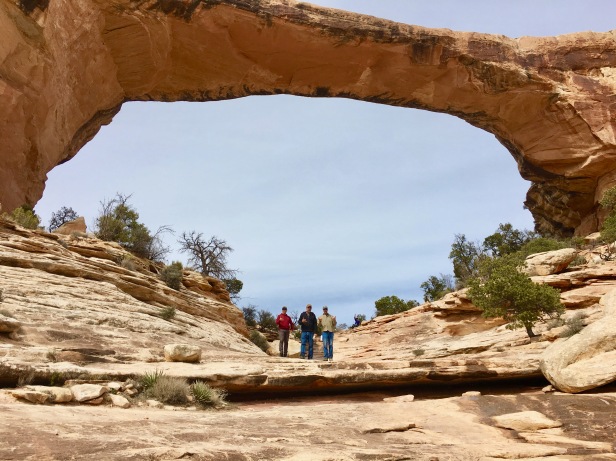 On the drive back we stopped at a spectacular viewing location before driving into that side of the canyon to go through Valley of the Gods.

There were hoodoos and rock formations everywhere and we had fun calling out what we saw in the shapes. 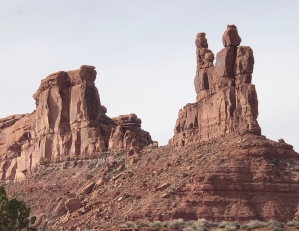 Our drive came out at the entrance to Valley of the Gods where we ran into another group of Xscapers on their way to Moab!

Our three-rig group disbanded for a couple of nights preceding the convergence. We would have liked to stay at Gooseneck but there was no internet service – and that’s just unacceptable these days.

There was a nice town on the pass into Moab that had great service, but I wasn’t ready to camp somewhere with snow on the ground, so we drove through and down into the valley. Which put us at a really nice BLM campground (paid site with no services) just a few miles away from our destination.

Today we are leaving that site and it happens to be the date of our two year nomad-iversary. Time has flown by, yet it seems we’ve been doing this much longer.

Now it’s down to the business of some heavy socializing. Tom has been over-the-top excited about this for days. It will be great fun to re-connect and to meet many more fellow nomads. 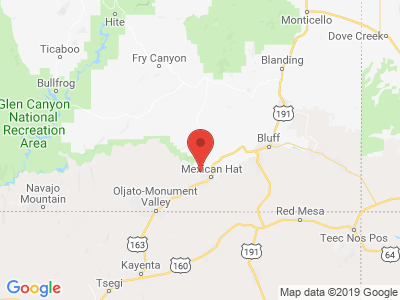