What an unexpectedly good time we’ve had at this Army Corps Campground! When searching out our next stops, I like to look for Army Corps of Engineers  sites first. Only two sites popped up in the whole state of New Mexico, but they weren’t too far from our next destination, so that’s where we headed from our stay in Farmington. I like them because they are always at water (usually dams) and the sites are big and they aren’t much money. In this case it was $6 per night without hookups and we had a lovely view of the lake out our front windshield. Score!

We pulled into beautiful weather although the wind picked up in the afternoon. The next couple of days were expected to be in the 80’s – so perfect opportunity to take out the kayak. The lake  wasn’t beautiful, but it was smooth enough.

We got a fairly early start and paddled up the Rio Grande River that feeds the dam. We didn’t get too far upstream because the water was pretty shallow, but when we turned around to get back to the lake we took advantage of the current and that’s the first time I’ve gotten to enjoy “floating” down the river. It didn’t last long, but we paddled to the other side of the lake for a picnic lunch. A really nice day so far.

When we were driving back to camp, we saw a jeep we recognized from the Moab convergence being pulled by an RV heading into our campground. We didn’t know who it was – other than a fellow Xscaper – so we honked and waved anyhow.

Turns out the driver (Corey) was the first of a group coming from Farmington on their way to the convergence as well. Some we knew and some we didn’t, but by the last day, we were all very well acquainted! There were 7 or 8 rigs all parked in the same loop and we gathered for happy hour about every other night. Good times!

While staying at the lake, we drove into Santa Fe a couple of times to check it out. We were only about thirty minutes away. On my first visit to Santa Fe years ago, I learned of the miracle staircase at the Loretto Church, so of course I had to take Tom to see it.

We also toured the oldest house, estimated to be built in the mid 1700’s.

We had a great time visiting with several shop owners, and had a yummy late lunch at a place recommended from a friend back in Tulare!

Friday the weather cooled considerably so we took the hike at the nearby Kasha-Katuwe Tent Rocks National Monument.

It was beautiful weather and an awesome hike. We took so many pictures it was hard to narrow it down. 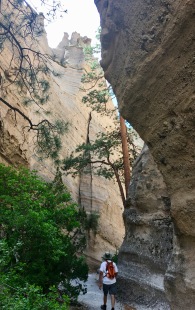 The hike took us from the bottom of the formations to the top. 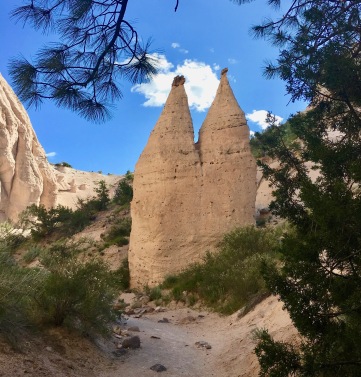 Such an interesting place. As the sun sailed across the sky, the formations took on different hues, and the views were so different going up and coming down.

The wind started picking up, but we were done before it got too bad.

Before we even left Farmington, Tom had found a Crawfish and Blues festival near Cochiti and we got tickets for Saturday. It was in the tiny & artsy town of Madrid. I only realized later that it was the town featured in the movie Wild Hogs. 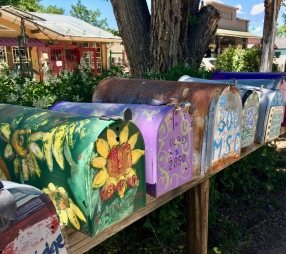 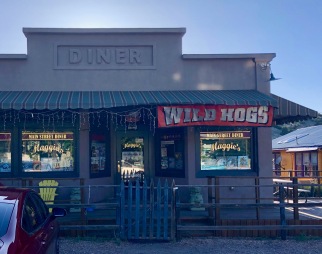 They were serving piles of crawdaddies, and Tom enjoyed eating them. Me, not so much!

The bands were awesome. They had three playing at a time and we walked around between them. A very nice day.

Sunday was Becky’s birthday, so that night we had a dance party in Scott’s rig – who’s birthday was the next day. So we had to stay long enough to celebrate it as well! Let’s just say that I’m glad we didn’t have to get up to go to work Monday morning. And of course I have not one incriminating photo. Darn!

Wednesday was a special day for me. I had several packages arriving from Amazon, one of them being my books in print!  The culmination of a very long project, it felt really good to accomplish that lifelong goal.

Thursday night we had to have a going away party – of course –  and now on Friday we are all heading to the convergence in Taos where I expect we will be even busier.

As usual, the time flew by. I managed to get a couple of projects done, but my to-do list never seems to shorten.

We were intending to do more hiking, but the weather turned super windy. The places we wanted to go were only about ten miles away, but roads were closed due to flooding so it would have taken us one to two hours to drive around. We’ll be coming back to Santa Fe, so we decided to wait on those.

Of course the weather as we were leaving was perfect. I think that’s a Murphy’s Law:  The best weather on vacation is the day you have to go home. So many times in the past I’ve hated to leave because the weather was finally perfect. Now it’s not so bad because 1) the vacation is never over and 2) the weather should be great at our next destination. We’ll just take it with us! 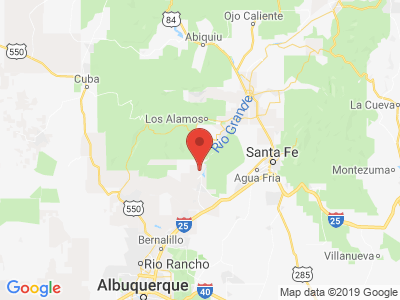 One thought on “Cochiti Lake Campground”