At the annual Xscapers Bash in January, we signed up along with our friends for the convergences (gatherings) in Moab, Utah in April and Salida, Colorado in June. We did not sign up for the one in the middle: Taos/Santa Fe. One, because our close friends couldn’t make it, and two,  because – well, I didn’t want to overdo the gathering thing. But the experience in Moab was great, and we were going to be in that area in New Mexico anyway, so we finally signed up before it sold out.

I’m glad we did! There has been so much to do here in Northwest New Mexico, that I’ve broken this blog into two parts:

More often than not I type up these blogs while Tom is driving us to our next destination. That is one reason I’m less prolific than in our first year: We’re not moving as often.

This time we are on our way to the second leg of this convergence. The whole group is moving from Taos to Santa Fe, splitting the week-long event into two parts. This is the first ever Xscapers Caravan.

This event  feels like the smallest Xscapers event we’ve ever been to. Although I heard there are six more rigs than there were at the Mexico convergence. Maybe it’s because after joining in on four Xscapers events in a row, when we walk into an event I feel like we know the majority of the people there. I like that, although I still tried to search out new people to meet.

The next day, Saturday, was booked with events.  We started with a drive into town to tour the Taos Pueblo, the longest continually inhabited pueblo at over one-thousand years! It was very interesting to see a three story high pueblo that has not deteriorated, especially since we have seen so many ruins lately.

The Red River Tewa tribe continually maintain it and all the home buildings are privately owned. They are not sold but passed down from generation to generation of family members. We had a tour and then were free to roam the grounds. Many of the homes are converted to shops so it was fun to window shop.

We went to lunch with friends Don and Erin after that then back to camp to gear up for a hike along the Rio Grande at the Gorge Bridge.

It felt good to get some exercise after being holed up because of the wind, and luckily the weather cooperated. We started out as a group, but everyone went at their own pace. 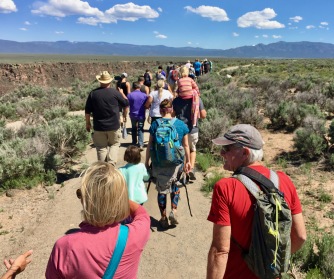 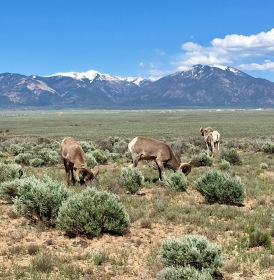 We saw several Big Horn sheep – some were too near the trail! 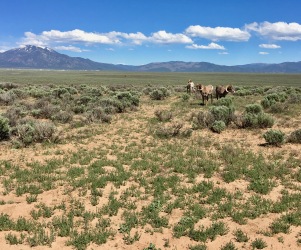 It was a flat hike, but the views from the edge down into the gorge were awesome. 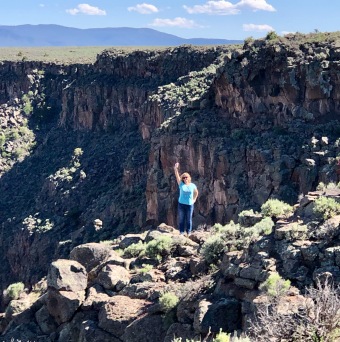 Then we all went back to camp for a beer-luck (like a pot luck with drinks instead of food) and then we played games at the Xscapers Olympic Trials – a practice run for next year’s Bash. Then we had a DJ Dance party for the rest of the night. A pretty full day!

Sunday for us and a few others began with a trip to the Earthship Homes  visitor center where we got to learn about them and tour the one that is open.

We’ve always been interested in the Earthships and the community, so I was pretty excited to learn that the Greater World Community was right down the street from the brewery.

Back to camp for a lunch followed by Sunday Fun-day Bloody Marys and a live performance by Status Crows. Tom participated while I stayed in to work (the real kind!). That evening Tom and I drove into the old downtown area of Taos. It’s not as uptown as Santa Fe, but I liked the area much more. Just a beautiful green valley surrounded by snow tipped mountains. Tom’s opinion was opposite, but I hope we come back here to explore more.

Now it’s Memorial day and we are re-tracing our route back towards Santa Fe. The drive is beautiful along the Rio Grande and hopefully the wind will go away. Then it will be perfect weather!