Before we began our adventure, if someone would have told me that we’d develop more friendships while on the road than we did while living in one place, I would have told them they were crazy. But that is exactly what has happened. I would have never thought we’d be hiking and traveling and gathering with so many in-person genuine friends.

We’ve had dinners and happy hours and game nights. We’ve gone hiking and exploring together. We’ve gotten to know some of them pretty well. And they are all really great people.

And it has been totally unexpected. And amazingly fun. (And when we’re having fun with people, I always forget to take out the camera!)

I never would have thought that our trip planning would revolve around where the next meetup  would be rather than around the sights of the US – of course with this lifestyle, you get both!

After leaving the last convergence, we went to the only other Army Corps of Engineers campground in  New Mexico – near a tiny town called Abiquiu. The area is famous for being the home and studio of the artist Georgia O’Keefe.

O’Keefe often stayed at the nearby Ghost Ranch and painted many scenes of the incredible surrounding landscapes. Such a beautiful area along the River (Rio) Chama. The colors of the canyons are amazing.

There are several hikes around Ghost Ranch and we did a couple. The first one we did was called Kitchen Mesa and we hiked with Sonde who was camped next to us.

The views throughout were amazing, and the clouds were changing continuously – as they did the whole time we camped there. Sonde and I both thought the one below (right) looked like a crab. 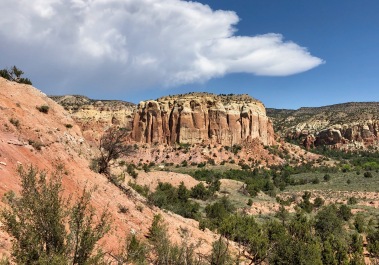 On this hike, Sonde and I stayed on the trail and waited while Tom scrambled up the rock crevice and got the spectacular view from the top. 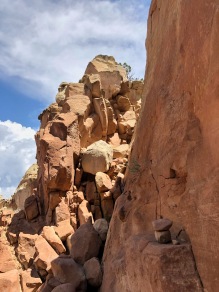 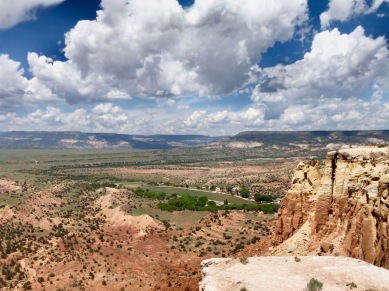 There are also a lot of other things to do at the ranch: see O’Keefe’s cottage as it was in the 30’s, walk a labyrinth, spend time at the library, visit the two museums, and picnic under the giant cottonwoods. We did all of the those.

Here is Tom in front of the “old” cabin they built on site for the movie City Slickers, which was filmed on the ranch along with many other famous movies.

We went back to Ghost Ranch on another day and did the Chimney Rock hike with Becky and John. 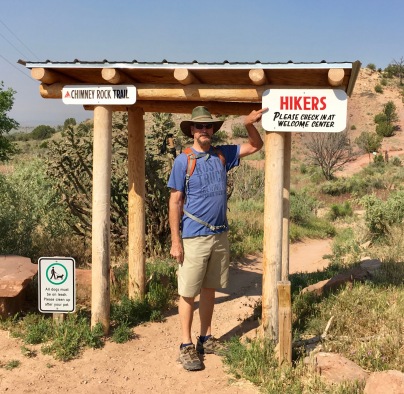 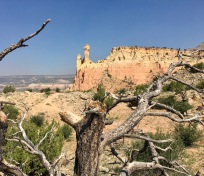 One blustery day, Tom and I took a scenic Jeep trip out to nearby towns Coyote and Gallina – which were more like housing settlements than towns.

The drive through the mountains was beautiful and I especially enjoyed all the Aspen Groves.

Another day we caravanned out to the Monastery of Christ in the Desert – where I gathered 15 mosquito bites while walking on their property near the river!  They formerly grew hops for the beer they made there.

The drive there and back as it followed the Chama river was gorgeous. We also drove on to Echo Amphitheater, a large niche in the rocks that definitely lived up to its name.

We all enjoyed yelling and shouting and hearing the echoes.

The weather was really great while we were there – if a bit windy at times. Tom did some painting and flute playing. I got some work accomplished.

A couple of times we explored Abiquiu, the local “pueblo”, and what I thought was a native reservation was really a Spanish land grant. We got a lot of info about the area talking to the owner of a local art gallery, but there wasn’t much to the “town”.

The town had one very popular store and gas station; Bode’s General Store,  which the local librarian referred to as “their Disneyland” and it had everything from fishing tackle to cast iron skillets to silk scarfs.

On our last night before leaving the campground, we met even more great people (more Xscapers heading to Colorado) and we all had a great time visiting and talking about when we would next meet.

Tom and I marvel at what great friends we’ve made since starting our adventure and it will be a little weird now to be off on our own for a while – until we reunite again with these new friends and others we haven’t seen in a while – at the next convergence in Salida, Colorado. 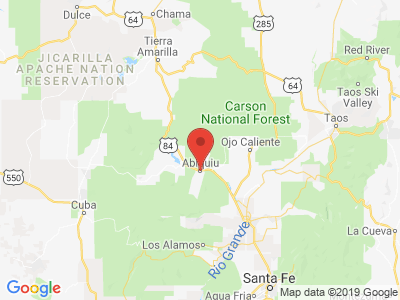 2 thoughts on “Abiquiu and Ghost Ranch”

If this is the pre party imagine the fun we’ll have tomorrow night! #excapersarethebest #desertblowout #lifeisgood
The view out my office window as I (Joy) attempt to get caught up on blogs...going back to July!!!
I’m not sure they’re going to share!
Life is good again in the rightlane! Cheers from pacific Beach!🥂
Weekdays are slow but we’re getting ready for our busiest weekend yet....and then it’s almost over-hurray!🍾🥂🍻🥃 #whoknew #pumpkinstationplazabonita2019 #pumpkinstation
This is pumpkin carving the cheater way! But I still had to dot the worst part - scooping out the guts! #pumpkinstationplazabonita2019 #pumpkinstation #jackolantern