Well, we survived the Xscapers Annual Bash. What a good time! We hardly spent any time in the rig – it was all about socializing. That is what the bash is about: Good times with good people.

Our good friend Judy of Cage Free RVers did an awesome blog (and much more timely) about the experience there and you should visit it here. That says it all. But you can read on for more of my take on the event.

Xscapers events are geared towards people who work full time from the road, so most gatherings don’t start until late afternoon. There were presentations on lithium batteries, boondocking, driving to Alaska, and more. So there was a lot to learn, but compared to other gatherings we’ve attended, this one was less informative and more geared towards socializing. At least, that is how we spent our time!

There were multiple bands and dances, game nights, open mic performances, and even a hilarious dating game. There were themed dress up nights, food and drink contests, a potluck, a catered meal night, a couple of nights with free beer, and plenty of bonfires. It was overwhelmingly fun!

The first night was 80’s themed night, and thanks to Pam’s prodding and advanced thrift store shopping, we were dressed for the occasion.

One night they had a margarita throwdown. Mark and Judy had a great tasting entry and I think Tom and his new friend sampled all forty that were there!

The second themed night was Fiesta Night and Tom and I borrowed our costumes from some very prepared fellow RVers. It was also the night of the Xscapers Olympics, and the games were both hilarious and challenging.

Tom and Pam playing a game at the Xscapers Olympics.

The last party night was themed Neon Night, and the costume creativity was amazing.

As I was searching for pictures to post with this blog, I was disappointed. So much happened after dark and my photos didn’t turn out. Or they were too shadowed or blurry. Which all goes to say that I was more interested in having fun than capturing the event on film. There were a few great new people we met that I don’t even have pictures of. While we did meet new people, we spent the majority of the time with people we have met before. 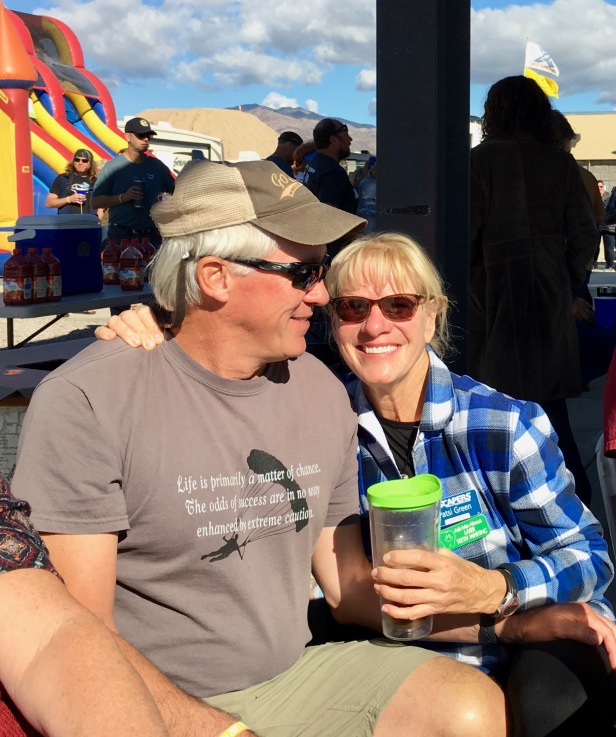 And it was really great to catch up. Again, I highly recommend seeing Judy’s great pictures by clicking here.

In years past, we have gathered for talks and presentations around pop up tents or campfires. This year I was happy that we had a real building to gather in, because we had some heavy rains while we were there. 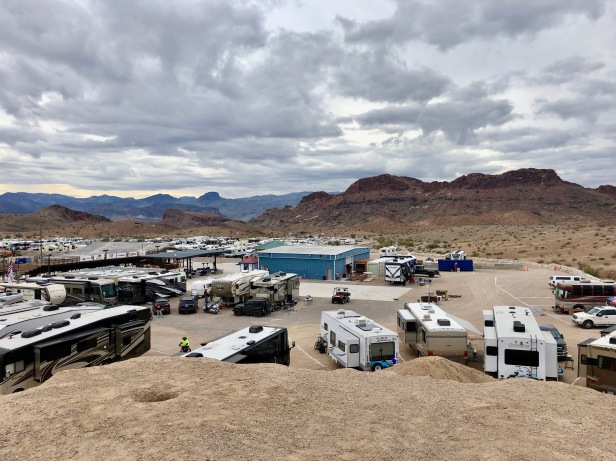 The camping was set up on the tiers at the  rodeo grounds. We were in the general area (aka able to run generators) on the top tier. Most of our friends were in the solar only area on the bottom tier. In between were grouped the solo travelers, the families, and the party hardy group. So you can imagine there is something for everyone.

They had a Bloody Mary Sunday, and again, the creativity of the garnishments people brought was amazing. 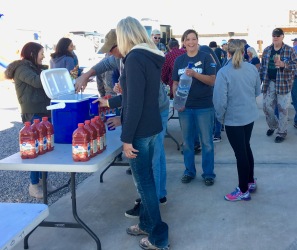 On Saturday, they had a vendor fair. Thankfully it was sunny and warm and Patsi and I teamed up to share a booth selling our wares. Patsi makes incredible wrapped pendants, and I was able to find new homes for some of the fairies.

There was even a daily morning group meditation, and I think Tom made it to every one, but sadly, I only got out for the last one. I may not have gotten out of the rig early, but we were busy every minute of every day it seemed.

Although we did get one project tackled while we were there: We have two pocket doors that lost some screws on the back rails – think very inaccessible. We had been putting off repairs until now, but Tom noticed that one of the the rails was starting to crack, so we had to address it now. Tom was able to bounce ideas off our friends, who all offered to help. We broke off the headers and Tom was able to remove the doors rather easily. Then, with a couple of trips to hardware stores, a bunch of borrowed tools, some body contortions, and encouragement from his buddies, Tom got the pocket door rails screwed back in. That was a load off! 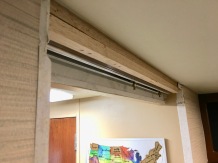 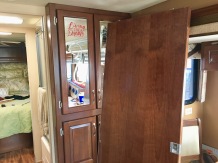 One day we left camp to meet up with some online friends. We’ve “met” them through their YouTube channel, Life with Ken and Jane, and we knew they lived in Lake Havasu, so we met them for lunch and some really great conversation. They are thinking of making the leap to full-timing, so we hope they join us down the road someday!

This time it wasn’t too sad to be leaving, because we are only heading down the road to Quartzsite, where most of our friends are heading as well.  And hopefully, we’ll get a little R & R before the party starts again – on our trip to Mexico in just a week. So stay tuned!

2 thoughts on “The Big Bash”